Self-Publishing In A Bear Market 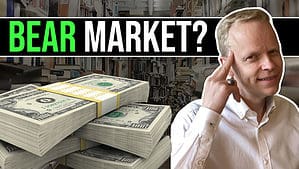 What market are you serving? Here’s what you should be doing when you’re self-publishing in a bear market.

So, we are entering a bear market. The question I have for you is, are your books ready to be able to handle what exactly is about to happen as sales are starting to decrease? That's what we're going to talk about today.

Now, some people pretend there isn't a bear market. These fake gurus are telling people that they can put books on the market and make millions of dollars off of these books. I'm telling you, during this exact period, that simply is not true.

This market is going to hit your business just like it hits anyone else's business. So, if you're expecting your self-published books are going to continue skyrocketing in sales, that probably is not going to happen.

We're going to see some pulling back a little bit on it. But there are things that we can do to protect ourselves. The first thing is, how do we even know we're in this exact bear market? The answer is you start seeing things like Amazon.

Where they're laying off employees and trying to find ways to cut costs. One of the most popular ways when it comes to it is decreasing the royalties and making it more expensive for self-published authors. This is an option that is available to Amazon along with a lot of these other companies.

As they're trying to find ways to survive this negative market that we're in right now. When it comes to trying to increase sales or profitability that they have. To survive properly as they come through this. And we exit this particular type of market.

Check out this related article: START Self-Publishing Like This (Don't FALL Behind)

So, as a self-publisher, how exactly are you going to be able to protect yourself against specific distribution channels raising their rates or prices? Or decreasing your royalties and the amount of money you can make? Well, that's something I often discuss in my free Checklist, where we're going through the different options available.

In particular, I'm telling you IngramSpark is the place to be for your books. That is only second to Amazon and after that, it would be getting them into Draft2Digital so that we have ourselves well spread out.

So that when this market is coming and these companies are trying to find ways to cut costs or increase the money coming into them and they're saying, hey, we see you're making quite a few royalties, maybe we should decrease that percentage that you're getting on the royalties.

That is one of the huge advantages of Amazon. We want to ensure that our books are safe on other sites. They're able to continue to give us those royalties that we need and deserve for the books that we're trying to sell to our ideal readers on the platforms. So, that's a very important point there.

Using As Many Types Of Bait As Possible

The second thing is making sure that our books are available in every possible format. So that when a reader comes to your site, either your website or one of these platforms like Amazon and others, you're going to have your book as an eBook, a paperback, a hardback, and an audiobook.

You want it in all of the different formats that they're going to want the book in. So, it's very easy for them to consume it in the way that they would like. The reason is that the probability of getting a given sale on any of these markets for each of these types of books on any given day is a particular percentage.

When we enter a bear market where the markets are going down and there are a lot fewer sales happening. The probability of making those sales in each of those different areas is also going to decrease. What exactly that means for you as a self-published author is that you need to make sure your book isn't in as many locations as possible.

You have to think about it. A better way of looking at this is that you're fishing and the number of fish that are out there is decreasing. So, what we want to do is get as many lines out into the water and possibly other waters. Using as many types of bait as we have.

Many types of lures and bait that we have on those hooks. So that we can try to see if we can catch a fish. So, even if I tell you the number of fish has decreased by half or more, that still doesn't mean you can't catch fish. Just make sure you have a lot of lines and a lot of different types of bait that we have out there.

Check out this related article: 3 Self-Publishing Skills that Pay Off Forever

So that we give ourselves the best chance to make as many sales or catch as many fish as possible. Given the difficult situation that we find ourselves in. I know here in Norway, one of the challenges we're having is a shortage of salmon. And so, they have to almost cut it and tell people you're not allowed to fish for the salmon.

But in the areas where you can fish, then you want to make sure you're getting the most for your fishing experience. When you're doing it up in Northern Norway where they had a full one-year band on the fishing that was going on up there.

The final tip that I have for you on how to deal with this downswing that we have in the market at the moment, it's going to be to stick in the game. This is such a common temptation, it's that you see other people especially if you bought into what these fake gurus tell you that, oh, you're going to do great and your books are going to sell millions of copies.

Often, it's hybrid Publishers and some of these others who will say, oh yeah, just look at the testimonies of people who've been through it and say, oh certainly it will. But the thing is that most people who come in with that mindset, give up quickly.

Maybe after only six months to a year during this market. Even worse, it may even attempt some authors who have been in it for a while to say, look, I'm just giving up because the money's not stable enough.

Sharpening Of The Saw

I'm telling you that if you stay in the game and keep producing books on the market in the different formats on these different platforms, running ads against these books and doing your content marketing and you're using all of these sorts of different strategies and tricks to try to drive as much traffic and optimizing these pages, we're going to continue to get the sales.

Your competition is going to give up and quit publishing books in your genre while you keep going. And when the market picks up again, then there you are, you're now the board leader. You're going to be the person who's making the serious sales.

You may have new people entering the market but they're starting all from scratch. That is something that can never be underestimated, the role of staying in the game for the tough times as well as continually sharpening your saw.

I remember that was one of the things when I was sitting through as a Cadet at the Air Force Academy, I was listening to Covey talking through his thing. One of the seven habits of highly effective people is exactly the sharpening of the saw. Where you're getting better at the skill sets.

But it doesn't happen overnight and does not jump and shift ship or switch over to something else when you're working on your self-publishing. Because then, you're just going to start from scratch and every market's getting hit during this bear market that we find ourselves in.

Check out this related article: 3 Self-Publishing Practices You Should Do EVERY DAY At Home!

Where the economy is going downwards. Inflation is going up; things are getting more expensive. We're having to think through a lot of things and so it makes it difficult. But it is worth investing in yourself.

That's one of the reasons why I continue to do Coaching and selling courses. Because people understand that if you can improve the quality of what you're doing, you're going to be able to increase the number of sales that you're getting with the right strategy.

So that even in a negative period like this, you'll still see a decline. But you can even have an uptick in your total sales because you're using new strategies that are doubling or tripling what your results would have been.

So, you can still sometimes see a bump that's happening now. And many people are seeing it especially as we're entering into the Christmas season and it's coming in. But my question for you today is, how are you preparing for this market that we're in? What have you done to protect yourself?

Go and let me know below in the comments and check out my other blogs and videos for more answers to your self-publishing questions.

Do you think your email marketing is ineffective? Haven’t tried ActiveCampaign yet? It might be the right one for your book email marketing. Holding Your Readers’ FocusYou may be thinking that just because you’re an author, you don’t have to pay any attention to marketing and especially not email marketing. Will you be making a huge END_OF_DOCUMENT_TOKEN_TO_BE_REPLACED

Are your books not selling that much? You could increase sales by changing your mindset in self-publishing.Making A Lot Of MistakesWhen I was first getting started with self-publishing, I figured that my number one problem was that the quality was not high enough. Things needed to be perfect before I’d be ready to put my END_OF_DOCUMENT_TOKEN_TO_BE_REPLACED

Are you looking for a tool that can format your book perfectly? I have found the best tool for formatting your book with Jutoh. Having Errors When Formatting Are you paying people to do the formatting of your book? If you’re making a huge mistake that is costing time and money, stick with me while END_OF_DOCUMENT_TOKEN_TO_BE_REPLACED

How To Self-Publish In A Recession

Self-publishing can be challenging especially during a time of recession. Learn how to self-publish in a recession successfully. Recession Proofing Our BooksIf you haven’t noticed, we are entering a global recession and that means your books are going to stop selling as many copies. Therefore, you’re going to need to take the right steps to make END_OF_DOCUMENT_TOKEN_TO_BE_REPLACED