How To Self Publish Novel?

Couldn’t figure out what has gone wrong with your book and why it’s not selling? Here are the self-publishing mistakes to avoid for your books to be of high quality just like the top bestsellers on the market.Editing Back And ForthGary was getting ready to start writing his seventh book. The problem is that Gary END_OF_DOCUMENT_TOKEN_TO_BE_REPLACED

Keywords could play an important role in making your books visible on search engines. Learn how to use keywords on Amazon KDP now.Finding And Buying The BookBeth was really proud of the clever title that she had come up with a “Gardening” book except for one problem. This clever title was not being searched and END_OF_DOCUMENT_TOKEN_TO_BE_REPLACED

Are you fully determined to do self-publishing but don’t know how to write, publish, and sell an eBook? Let me tell you the key steps that will help you succeed in self-publishing.Developing A Self-DoubtTim deleted his entire manuscript off of his computer and was ready to call this writing thing quits. That’s one of the END_OF_DOCUMENT_TOKEN_TO_BE_REPLACED

Ever wonder how to get a book published correctly? Let me tell you how exactly you can do that based on my own experience.Knowing The Phases Of Self-PublishingKaren got back the draft version of her children’s book from the hybrid publisher and it was a complete mess. She was ready to give up but that END_OF_DOCUMENT_TOKEN_TO_BE_REPLACED

Are you struggling to sell your non fiction self-published books? Here are the 3 reasons non fiction books don’t sell that you need to know.Choosing A Catchy TermSarah told me nobody wanted to buy her recipes. For some reason, they were just not high enough quality. Well, she was very much mistaken and that’s the END_OF_DOCUMENT_TOKEN_TO_BE_REPLACED

Have you published your book and wanted to make some adjustments? You might be asking, is it too late to change my book? I will tell you the answer with some tips to help make self-publishing easier for you.Frustrated With A Terrible StrategyLarry told me, “I guess we should just count my first book as END_OF_DOCUMENT_TOKEN_TO_BE_REPLACED 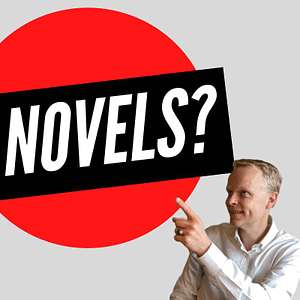 Maybe you already have written your novels but you don't know how to go about publishing your books. Learn how to self publish novel and some of the secrets that will make self-publishing easy for you.

When I First Started

Today's question has three answers. You're going to want to stick around for the third answer. Because it's a secret that makes the difference between those self-publishers who publish novels who win and those who never managed to even get their novel published in the first place.

Let's get into it. The question that was asked to me was, how to self publish novel? Now, many people, when they're first coming out with an idea, they've got an idea or a story in their mind.

They sit down and you start to write the story and your novel is starting to be written. But when you get to the end, you think "wow! that was great." You got that done and that was a huge amount accomplished.

You imagine yourself possibly becoming the best time seller, a best-selling author. So you have some questions in your mind but to do that, you're going to need to self publish the novel or get it traditionally published.

But in this case, maybe you've already realized that the traditional publishing route is maybe not right for you. That is based upon the low level of margins and other things.

So, you want to self publish but where should you begin? That's exactly what we're going to answer today. But before we get into the answers, you can grab a copy of my free Self-Publishing Checklist.

So, how to self publish novel? When I first started, I did not go from a novel standpoint. Rather, I went from a non-fiction standpoint because I didn't exactly have an idea of which story I was trying to get out.

But I had some ideas on productivity and gold achievement that I was very interested in. In other words, some of the things that I had gone through and practiced in my own life, from the get things done method or Stephen Covey's 7 Highly Habits.

Several methodologies that I have explored, I wanted to get them out onto the market. As I started the process, I was following a formula that I had learned in some books that I had read. And later some courses that I'd taken.

As I was following this formula, I began to understand that whether I was doing fiction or non-fiction, there were many things in common between these two different ways of self-publishing that really we're not too far off from each other.

Check out this related article: Is It Worth Self Publishing A Book?

There are advantages and disadvantages to each. But in terms of the steps like how to go about doing it and where to start, that was something that took some practice and a lot of failure on my part. To discover what the keys were, one other thing I would say is I listened to a lot of podcasts.

Youtube shows again the courses I had taken, and other self-publishers in forums discussing what were the best tactics here to produce the book. You have three parts which would be writing the book then self-publishing the book and then getting the book to sell. All three of those are tied closely.

Key To Succeed In Writing

If we are writing the book, our goal is not for it to become famous after we're dead and gone. But actually that we would see some of the popularity of that and maybe you could live off of it.

There are lots of options available so that was one thing we were looking at. So, how to self publish novel? Let's get into it.

Here are some answers, the first thing is the key to success is keeping it simple. Kindle is the best place to go if you're going to self-publish. When you're first getting started, it requires the least amount of effort to get the biggest results.

You've already written and you're going to want to put it into Kindle but to do that as we see in number two, the most important elements are your market. If you're writing a novel for which that you don't even know if a market exists, that's a little bit of a problem.

Because we want to write to underserved markets. Even if you're thinking, "I don't want to change my creativity or whatever it is". You at least should see if you can modify it slightly.

If you're writing a book on something like aliens from Mars but we find out that alien books from the moon actually sell better and sell more copies but there are not that many of those books out, we see that there's a hungry market for what you have.

Because the market has not been oversaturated. Keeping in mind there are 2 million books a year being published globally. If you want to make it through the noise, you need to make sure that there's actually a market that wants to buy the book that you're writing.

The funny part of this whole thing is you can have books that are relatively low quality. But if they're writing in a genre where the market is hungry, they're willing to tolerate it.

The same goes for movies. There are certain movies I like to watch, I like zombie films or post-apocalyptic films. Sometimes, I normally have a rule which says that if the movie isn't like a seven or higher on the internet movie database, then I don't watch it.

But I'm willing to sync it lower to about a five if it's in a genre I like. So, the point being is finding that the right market is very important for you. The next thing is your title is critical to making sales.

People will be doing keyword searches. This is more important when you're doing non-fiction. But within fiction, they may be looking for that certain keyword they might like.

Maybe you're doing some science fiction, internet intergalactic battles and there are all sorts of stuff. But there are keywords in those titles that when a person is typing in, it will show up and that person will perhaps see your book.

Check out this related article: How Many Books Are Self Published Annually?

They'll see the next point which is your cover and it is the next important part. Paying to get a good cover, I don't believe in paying too much. My earliest covers cost a $100 or more.

But my later covers were $20 and they sold even more books than my earlier books. For only $20 on Fiverr, you can check out that affiliate link of mine.

You'll see the person that I use on Fiverr. She does an amazing job for only $20. Actually, I think it's $18 but you know, it depends, you just take a look at that.

Then the next is your description to lure people into the story. Using lots of open hooks and then the keywords that you're using to make sure that the type of novel that you have.

Then finally reviews, building up an email list. People who are willing to review your book and give positive reviews. You're going to want to pull in all of these together.

These are the key elements that you're going to get in terms of self-publishing your novel. One other key important point here was the formatting, which I use Jutoh. That's the software I use personally.

My virtual assistants use it when helping me put together my books to get them onto the market. It produces high-quality and everything looks flawlessly good. That's another tool you'll want to do to make sure that your readers are happy.

So that nobody's leaving negative reviews on your books. Now the secret answer of today which deals with not so much exactly how to self-publish but in terms of what the difference between the winners and the losers are.

You're not going to succeed in this if you look at all of the writers who never became self-published or published authors. You will see thousands and thousands of people who never did it. Usually, it's because everything has to be so perfect.

They want to take on and take biting off too much at a time. They don't understand that the key to success is, in fact, making mistakes. And I've made tons of mistakes to figure out some patterns to winning this game of self-publishing.

I'm pretty confident that if you follow through, you're going to succeed. You just have to make progress daily. And that is our secret answer for today.

Check out this related article: Is KDP Self Publishing Right For You?

So, how to self publish novel? What have you found? Have you found some tricks that I didn't mention above? Is there something in particular that you would find maybe with a novel?

Then, you would be dealing with self-help or non-fiction books. If you can break through the market, it's amazingly profitable and this is a great idea.

Go ahead and let me know below in the comments. I respond to all comments that come in. Check out my other blogs and videos for more answers to your self-publishing questions.