How To Overcome Self-Doubt As A Self-Publisher

You may be wondering if this year is a good time to do self-publishing. Should you self-publish your book in 2022? Or should you just wait for another year? Find out the answer today.Thinking About OversaturationTerry told me the market is completely flooded with books at the moment. So there’s no point in publishing one END_OF_DOCUMENT_TOKEN_TO_BE_REPLACED

Couldn’t figure out what has gone wrong with your book and why it’s not selling? Here are the self-publishing mistakes to avoid for your books to be of high quality just like the top bestsellers on the market.Editing Back And ForthGary was getting ready to start writing his seventh book. The problem is that Gary END_OF_DOCUMENT_TOKEN_TO_BE_REPLACED

Keywords could play an important role in making your books visible on search engines. Learn how to use keywords on Amazon KDP now.Finding And Buying The BookBeth was really proud of the clever title that she had come up with a “Gardening” book except for one problem. This clever title was not being searched and END_OF_DOCUMENT_TOKEN_TO_BE_REPLACED

Are you fully determined to do self-publishing but don’t know how to write, publish, and sell an eBook? Let me tell you the key steps that will help you succeed in self-publishing.Developing A Self-DoubtTim deleted his entire manuscript off of his computer and was ready to call this writing thing quits. That’s one of the END_OF_DOCUMENT_TOKEN_TO_BE_REPLACED

Ever wonder how to get a book published correctly? Let me tell you how exactly you can do that based on my own experience.Knowing The Phases Of Self-PublishingKaren got back the draft version of her children’s book from the hybrid publisher and it was a complete mess. She was ready to give up but that END_OF_DOCUMENT_TOKEN_TO_BE_REPLACED

Are you struggling to sell your non fiction self-published books? Here are the 3 reasons non fiction books don’t sell that you need to know.Choosing A Catchy TermSarah told me nobody wanted to buy her recipes. For some reason, they were just not high enough quality. Well, she was very much mistaken and that’s the END_OF_DOCUMENT_TOKEN_TO_BE_REPLACED 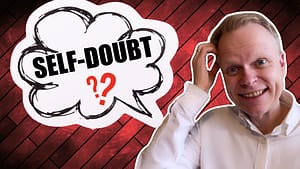 When self-publishing, you have to deal with the uncertainties that can come along the way. Let me tell you how to overcome self-doubt as a self-publisher and help make self-publishing easy for you.

How he was able to overcome self-doubt as a self-publisher. I first met Gary when he got in contact with me because he had signed up for one of my free Discovery Sessions. One-on-one sessions where we were able to take a look at his books.

When he put his first book on the market, he still wasn't very confident with it. So he had been sitting with his second book. He had been going back and forth. Round after round of re-editing it.

Because after all, the goal was to get the book perfect. Before he would actually release it onto the market. The problem though was that he kept going over and over.

He was wondering "If I put the book on the market before it's ready, isn't this going to make me seem terrible?" In other words, it will reflect on me as an author. So obviously, he wants to get the book absolutely flawless.

Before he would actually put it on the market by re-editing and re-editing it. That was one of the first things we had to take a close look at. When we were looking at what was going on.

So during the session, what we did was we took a look at his specific genre. We went into books that were in the exact category. Now let's say for his case, it was woodworking.

What we did was we saw all of the woodworking books. We found them on Amazon using KDSpy. It is the tool I like to use myself.

Then when we went to the number two book. We noticed some patterns and we opened it up. When we looked inside the book, we noticed the very first sentence.

It's in the very first chapter of the best-selling book. The number 2 in his entire category had a misspelling on the first and second words. They forgot to put a space between them and that suddenly brought some things to light.

It is that book was selling enough money. To make the author of that book about a million dollars a year. Based upon the current volume of sales coming through it.

So Gary was looking at this and suddenly a realization came to mind. The book doesn't have to be perfect to do really well on Amazon. That is exactly correct, he was exactly right about that.

So we took a little bit of a thing. He realized that maybe his book doesn't have to be perfect to do this. Just being good enough would probably be fine.

And what does good enough mean anyways? If it's making sales and giving value to other people or bringing joy to their lives. Does the book have to be flawlessly edited?

Do we feel that the number 2 author on Amazon for woodworking is a terrible author? They're terrible! Look, they have a mistake on the first page.

In reality, their readers don't care so much about that. What their readers are really caring about is the value that it does deliver. If it's a fiction book, does it excite them when did they read the book?

Are they literally just sitting there like an English teacher trying to find mistakes? Marking it in red ink to find every mistake that's within the book. Gary began to realize that it really isn't the case. So, how to overcome self-doubt as a self-publisher?

Check out this related article:  What Is A Reader Magnet

They're trying to find problems with your book. They bought the book because they want the value out of the book. Not because they're going to be doing grammar and spell checking on the book.

That isn't to say that we don't go through it and use tools like Grammarly. It is the tool I like to use especially when we're going through the book. To find the right way to see if there are any grammar or spelling mistakes.

We fix those things and then we continue with the journey. So that became the thing. What is the next step? How to overcome self-doubt as a self-publisher?

One of the questions Gary had was maybe "Should I go back to my earlier book and start looking at it?" To see whatever things that we had discovered in this book that could be fixed.

Because several other issues could be optimized on the book. Both on the sales page and the layout of the book. That's the beginning of the book.

Continue Putting Books Onto The Market

I commented to him that "No, we don't waste time on the earlier books." If it only takes a few seconds, we can do that. But one of the issues is well, I don't like the cover.

That was one of the issues that Gary brought up on the cover of the earlier book. But I looked at it and it looked very much like the best-selling covers. For the other books that were making a killing in his market.

I commented to him that even though we may not like the cover, the title, or these sorts of things. Sometimes, it's not worth the effort to make those adjustments. If we see it's not making any sales, let's go in there.

Let's see if we can make those adjustments as necessary. But our goal is to continue to put out books onto the market. Each of those books should be better than the previous book.

We do not under any circumstances want to waste time. He realized by the end of this that yes his current book is good enough. His previous book is just fine as is.

It can stay on the market. He was very eager to move to the next step. It would be getting into the formatting phase of his book. So that he could get it on the market as well.

He began to have a sense of confidence. That I didn't see when he was struggling with self-doubt as a self-publisher. That change had occurred, that realization, and that look.

Check out this related article: Optimize Your Amazon Book Page

I don't have to have a perfect book on the market to do this. That is if I use all of this extra time and resources on making the book so perfect. It's a waste of value.

His book has something to put into the world. To teach people how to do woodworking much better. But by keeping and going round and round on his specific book.

He's depriving his readers of exactly this issue. The value that he has is to show them how to do the woodworking. That was something he did need to learn.

I feel that he has learned it. We'll have to take a look and see how it goes in the next session with him. So, that’s how to overcome self-doubt as a self-publisher based on my client’s experience.

In the meantime, check out my previous blog and video so that you can understand how long a self-published book should be.