Why Did My KDP Account Close Without Any Notification?

Couldn’t figure out what has gone wrong with your book and why it’s not selling? Here are the self-publishing mistakes to avoid for your books to be of high quality just like the top bestsellers on the market.Editing Back And ForthGary was getting ready to start writing his seventh book. The problem is that Gary END_OF_DOCUMENT_TOKEN_TO_BE_REPLACED

Keywords could play an important role in making your books visible on search engines. Learn how to use keywords on Amazon KDP now.Finding And Buying The BookBeth was really proud of the clever title that she had come up with a “Gardening” book except for one problem. This clever title was not being searched and END_OF_DOCUMENT_TOKEN_TO_BE_REPLACED

Are you fully determined to do self-publishing but don’t know how to write, publish, and sell an eBook? Let me tell you the key steps that will help you succeed in self-publishing.Developing A Self-DoubtTim deleted his entire manuscript off of his computer and was ready to call this writing thing quits. That’s one of the END_OF_DOCUMENT_TOKEN_TO_BE_REPLACED

Ever wonder how to get a book published correctly? Let me tell you how exactly you can do that based on my own experience.Knowing The Phases Of Self-PublishingKaren got back the draft version of her children’s book from the hybrid publisher and it was a complete mess. She was ready to give up but that END_OF_DOCUMENT_TOKEN_TO_BE_REPLACED

Are you struggling to sell your non fiction self-published books? Here are the 3 reasons non fiction books don’t sell that you need to know.Choosing A Catchy TermSarah told me nobody wanted to buy her recipes. For some reason, they were just not high enough quality. Well, she was very much mistaken and that’s the END_OF_DOCUMENT_TOKEN_TO_BE_REPLACED

Have you published your book and wanted to make some adjustments? You might be asking, is it too late to change my book? I will tell you the answer with some tips to help make self-publishing easier for you.Frustrated With A Terrible StrategyLarry told me, “I guess we should just count my first book as END_OF_DOCUMENT_TOKEN_TO_BE_REPLACED 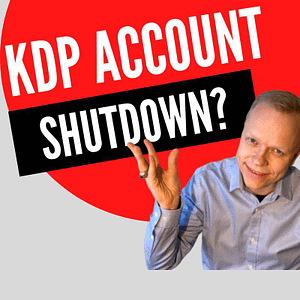 You are asking why did my KDP account close? Learn about the practices that you should not do to protect your account.

Amazon Has The Right

A question I got today is why did my KDP account close without any notification? That's an excellent question. The key issue is, on Amazon at any given time they can shut your account down.

So, all of your books will be frozen. You will not be able to access or update them. In fact, they can ensure that you cannot open other accounts.

If you attempt to, they will see your IP address the internet you have and they will block that from working as well. And any money that they would have normally paid you, they would not payout.

The amount of pain associated with having your account on Amazon closed is massive. So it could literally just be losing all of your revenue overnight. As a result of something you did or something that occurred.

Check out my Self-Publishing Secrets Checklist. It's for free and it will help you get started with your self-publishing journey.

So let's start with my story. When I first started, I discovered that Amazon had a whole series of reasons that they were freezing or shutting down people's accounts.

In one case even suing somebody, not really suing but forcing arbitration. But usually, it is just shutting down accounts.

If this occurs to you many times, they will not tell you the reasons that they are doing it. So that's the first thing to remember. There are two types of things that can get you in trouble.

One of them would be grey hat practices and black hat practices. That would be things for which you are in violation of their terms and agreements.

With the black hat, you would be in violation of the law, the international law, or perhaps the laws within your own country. I have a couple of comments that are very important to remember here.

First is when you are publishing on Amazon, you are share dropping. That is to say, you are using their territory to do it so they have the right.

Check out this related article: Do Book Publishing Companies Have People That Scan The Library Of Congress To Find New Authors?

If you read their terms which are hundreds of pages, you will see that they can shut your account down any time. And that is for any reason or no reason at all.

And they by telling you, that would give you the ability to possibly come back against them with legal action. But since they have already told you, they have the right to shut your account down without giving full reasons why.

This leaves you with very few opportunities. Once you are flagged, your account may be frozen forever.

Also, if you attempt to have other accounts using the same internet at your house, they can track your IP address. That will also create a problem.

Get To Know The Real Reasons

Now let's get to a couple of the reasons that your account may have been shut down. One of them would be, maybe you have bought reviews. Buying reviews for your books can be done through Fiverr or other sites like that.

They have done legal actions against the people who have been selling these particular gigs on Fiverr, Upwork, or other locations. So that's not only a grey hat that would also be black. It's illegal to do that, giving misleading information.

Another would be buying clicks. I have seen people get their revenue taken from that. Or setting their books for free to get people or machines to download a thousand or a million. It will get them in the top rankings when in reality their books are not there.

Then, they get people to buy and download those books in massive quantities as a result of it looks like a lot of people. Those have also triggered lawsuits from Amazon against individuals who are selling that particular service.

Also, accounts are being frozen or being warned as a result of buying that particular type of thing. Another one would be copyright claims. Maybe you are using books or material that other people own the rights to.

I have seen this where you would be using perhaps a trademark or symbols like from video games or other places like that. You are making money off of those and the owners of those trademarks or copyrights come after you.

They go to Amazon and make a claim and that results in you losing all revenue. All of your books being frozen so that you are not able to do it.

And if you attempt to republish, that can result in the permanent closure of your entire account. That is also not recommended.

Check out this related article: Should I Pay Money For Republishing?

You may even have competitors who claim that you are violating copyright. Just the claim itself can create a serious challenge for you.

Another one is changing prices too often on your paperback books. If you change it too many times in a given period, Amazon may still pay you out the royalties that you had earned.

However, the challenges will be, they can see that it changed too often. That also will result in you being threatened to close your account permanently. Perhaps you will see that they will just keep the revenue.

I have seen that with someone who had lost many thousands of dollars in a given month. As a result of changing the prices that they were selling their books.

Be Careful With What You Do

Then, combining ten books to get more pages to read. That also resulted in many account close. So these are the ones that I have seen people get.

Also, another thing would be to review swapping. It has also resulted in warnings from Amazon. Not necessarily it would also be account closures and even forced arbitration at least in one account that I can recall.

There are several things that you can do that can get your account frozen or get warnings from Amazon. So, that's the starting point and I have seen many of this since I have been publishing for many years.

I have been helping others publish and so we see these issues come up. There is a couple of things you are going to want to keep in mind. So what exactly are the answers?

Well, the first thing is, Amazon is allowed to change the rules at any time. So it is in your best interest to be in groups and be in contact with people who would be aware of it.

When people are getting their accounts frozen, you will also be aware that it's currently occurring. So that you would be able to stay away from those activities that they are doing.

Check out this related article: How To Write A Self Publishing Copyright Page?

These are the sorts of activities that will get you in serious trouble. The final one and this is maybe the most important that I have discovered. It is not having all of your books in one location.

You would not want to have them all in just Amazon but putting them on other websites like Lulu, IngramSpark, maybe Draft2Digital. Anywhere where they are spread out.

So if Amazon decides to shut down your account for any or no reason, which they have a right to, your entire business will not disappear overnight. You will indeed have the ability to continue publishing on these other websites.

That can make a difference for you. So, what have you found? Have you found that same issue?

Have you ever had an account get shut down? Or know anybody and maybe for a different reason? Leave your comments below.