Should I Pay Money For Republishing?

Couldn’t figure out what has gone wrong with your book and why it’s not selling? Here are the self-publishing mistakes to avoid for your books to be of high quality just like the top bestsellers on the market.Editing Back And ForthGary was getting ready to start writing his seventh book. The problem is that Gary END_OF_DOCUMENT_TOKEN_TO_BE_REPLACED

Keywords could play an important role in making your books visible on search engines. Learn how to use keywords on Amazon KDP now.Finding And Buying The BookBeth was really proud of the clever title that she had come up with a “Gardening” book except for one problem. This clever title was not being searched and END_OF_DOCUMENT_TOKEN_TO_BE_REPLACED

Are you fully determined to do self-publishing but don’t know how to write, publish, and sell an eBook? Let me tell you the key steps that will help you succeed in self-publishing.Developing A Self-DoubtTim deleted his entire manuscript off of his computer and was ready to call this writing thing quits. That’s one of the END_OF_DOCUMENT_TOKEN_TO_BE_REPLACED

Ever wonder how to get a book published correctly? Let me tell you how exactly you can do that based on my own experience.Knowing The Phases Of Self-PublishingKaren got back the draft version of her children’s book from the hybrid publisher and it was a complete mess. She was ready to give up but that END_OF_DOCUMENT_TOKEN_TO_BE_REPLACED

Are you struggling to sell your non fiction self-published books? Here are the 3 reasons non fiction books don’t sell that you need to know.Choosing A Catchy TermSarah told me nobody wanted to buy her recipes. For some reason, they were just not high enough quality. Well, she was very much mistaken and that’s the END_OF_DOCUMENT_TOKEN_TO_BE_REPLACED

Have you published your book and wanted to make some adjustments? You might be asking, is it too late to change my book? I will tell you the answer with some tips to help make self-publishing easier for you.Frustrated With A Terrible StrategyLarry told me, “I guess we should just count my first book as END_OF_DOCUMENT_TOKEN_TO_BE_REPLACED 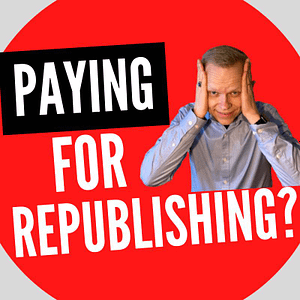 There are a lot of companies out there where you can get your books done but of course, you will be asking should I pay money for republishing? It is a matter of choosing the cheapest route. Check out below where exactly you can entrust your books without having to spend much money on the revisions.

Learning To Do It Myself

Today's question has three answers. The third answer is a secret to why you may be wasting a lot of money. And how you can win at doing exactly what we're going to be discussing.

So let's get into it. So the question that was asked was, should I pay money for republishing? The particular person who asked the question had a problem.

It was they did their publishing most likely through some sort of an agency that will do the whole process for you. Then afterwards, he realized there was a problem with the book.

So he went back to the publisher and said, "we're going to need additional editing on this book, to ensure that the quality is going to be high enough".

Now, you would imagine for the package deal, if they've done such a poor job on this process, they would compensate and pay the money or take the time necessary to re-edit the work and get it out to the market.

But in reality, they didn't do this. They want to charge a whole bunch of money to do one of the steps over again which is obviously a scam. They will have you pay money for republishing your book.

You can imagine the frustration. Well, do you repay them to do the service again? It's a package deal so you've already invested some money with them.

They've got you now. Because if you want changes they've got it in their software and that can be quite painful.

Check out my Self-Publishing Secrets Checklist that you will not want to miss. It's free and you can just grab a copy.

So let's get into it. When I first started, I was listening to podcasts and I was reading books. I understood that the advice that I have had was, you should just do it yourself.

So I started at the beginning. I did each of the steps and I made huge mistakes as I went along. I learned a lot by making these very mistakes.

Check out this related article: Want to Get Productive Fast? Try Todoist!

As I continued onwards, some of the things I did, including for example, when I was going to have the book, put into different formats like Kindle for Amazon KDP, I paid someone on Fiverr to do the formatting on the books.

The problem was that they chose colors. That when you would make it into a dark night time mode, suddenly you couldn't even see the Table Of Contents.

That is because they chose the color blue. They'd permanently frozen the colors there and so it became invisible. So I went back and they wanted more money to make even the small adjustments.

That was when I realized that if I was going to do this, I was going to need to be able to do it myself first. And then, I can train people to take on the work afterwards.

I ended up using a program called Jutoh. It's an amazing program. The best on the market for formatting your books. To make sure they're exactly perfect every time.

I tried Scribner and some others but this one here was by far the best book on the market. It is the best product that would give you the ability to quickly format your books into exactly the perfect format for many platforms like Amazon KDP.

Without having to go back and forth and pay additional money. But let's get into the question of should you have to pay money for republishing?

The answer is no, you should do the process yourself. Because there are tons of scams on the market. Where these services make it look so simple.

You just simply hand them the manuscript of your book. They let you make a few choices on the cover, the title, and all these sorts of things and then press to change all.

You see how this deal works. And in reality, they've got you. So it makes it a lot trickier, they start also with an initial price.

Check out this related article: Self Publishing Versus Publisher Battle?

And everything costs money. Each revision is going to cost an insane amount of money. So we could say, "oh we can do your book for only $1,000 or something".

Before you know it, you spent $5,000. They may even own the rights to the completely insane book.

They try to present themselves as though it isn't some sort of self-publishing or vanity publishing. But that it's really publishing. In reality, you have to pay to play and keep their game.

You do not want to enter into this sort of ecosystem. You should not pay them one cent more to do any changes to your book. You should simply take over control of everything that's going on with your books, that's the first thing.

The second thing is when you learn to do self-publishing yourself, you figure out what it is you like and what you don't like. The best thing is to execute. We do not want to go for perfect because, in reality, it's impossible.

Take Control Over Your Books

You simply can't get to perfect. Until you've done those steps enough time and you say, this is the standard of quality that's good enough for me. That is something a lot of people have found and that helps them, it's that we break it down.

And that's one thing with selfpublishingmadeeasynow.com, we break it down into simple steps. Our goal is not to make things so complicated.

Usually, it's just one to three steps for each of the phases we're looking at. And as you get better at it, then we can make it more complex. But it's okay because making it complicated later, doesn't change.

It doesn't overwhelm you because you've already adjusted to doing it the easy way. So that's a big aspect that you need to keep in mind here.

The third one and this is the secret here, it is the winning strategy that I've mentioned a little bit. It is learning the steps for yourself. That's the first part as I mentioned before.

But the second aspect to it is, then you train other people how to do those steps. In my case when I started, I learned how to do all the steps myself. So I knew what was involved.

Then and only then, I trained virtual assistants to take over that work. They would follow the instructions exactly as I tell them.

So usually we break it down to like three steps for each of the little processes. And so they would follow the three steps involved in that and that would make it possible for them to do the work. And I could produce a lot more books.

Notice there are no package deals. And with my virtual assistants, since we're paying on an hourly basis, I didn't have to pay them a thousand dollars to do some minor revisions to the books that we were doing.

But rather, I could simply have to pay them just an hourly wage to make the small changes and reput out the book, and then I could do the republishing on platforms like Amazon KDP. The quality level would be exactly what I wanted. But I don't have to pay an insane amount of money to take them through this process.

So what about you, what have you found? Have you found it worth your while to just keep paying, again and again, more and more money to these large companies that put out thousands and millions of books onto the market for people?

They make it sound so easy. But in the end, you thought you'd pay a thousand, you end up paying ten thousand and that is completely a scam. Then, you're not happy with the result.

And sometimes, this is the worst, they own the rights to the very books that you have put out. So literally, you're not allowed to make changes to your own books without going through them.

I've seen that it's not strategic to go that route where you'll pay money for republishing your book. You should take control of your books immediately and learn the steps yourself to avoid scam.

But let me know below, what have you found? And check out my other blogs and videos, you will see more answers to your questions today.