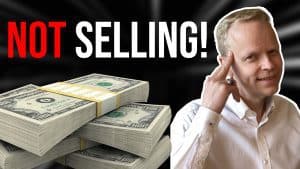 Are you struggling to sell your non fiction self-published books? Here are the 3 reasons non fiction books don’t sell that you need to know.

Sarah told me nobody wanted to buy her recipes. For some reason, they were just not high enough quality. Well, she was very much mistaken and that's the reason why in today's article, we're going to talk about 3 Reasons Non Fiction Books Don’t Sell.

It was about a year ago and Sarah had put her very first book onto the market. It was a book that was on the paleo diet. The thing was that she had spent a lot of time and was very interested in recipes.

She liked looking at these particular diets. She was familiar that the Paleo Diet was a bit popular and so she wanted to give it a chance. To put it onto the market and see what she could do since she enjoyed cooking in the kitchen and putting together recipes.

What better way than to share that with other people? So the problem is she wanted to get her book to sell. She had it on Amazon and in the Kindle format; eBook and also in the paperback format.

What was happening was she initially got the sales from her friends and family. After that, all the sales completely disappeared. So it just was not happening.

She was wondering if maybe people just weren't interested in buying her book. Because the recipes were just not high enough quality. That was the key issue, she was thinking that maybe if she just went back and fixed the recipes, that would change it, and then the sales would start to increase.

Unfortunately, her small attempts to change the recipes themselves did not impact the thing. As she realized that if people aren't interested in buying my books, then I'm not going to keep on writing any more books. She was ready to completely give up.

Check out this related article: My Best Book Marketing Tip

Because maybe her ability as a cook or chef was not high enough quality that people would even be interested in it for some reason. So the first thing was she decided that she had a couple of things she could do.

She had the title and she choose a really catchy title. It didn't have the word paleo in it or the paleo diet or any of these things in it. But it was something really cool about cavemen or something like that and it did stand out.

When you look at the other books in the same category, you would see the paleo diet. You were like, “Wow that is kind of a catchy name.” Nobody's searching on any of those terms for the name but she tried to do that and it had no impact on the sales.

The second idea she had was maybe people just don't know the value that's in the book. So if I put more text on the cover, lots and lots of text that would tell you exactly what this book is expected to be. So when you're at the thumbnail level and you're looking at the cover, you would simply see all of these things.

If you expanded the cover, the only problem was it just made the cover busy. So we had a title that wasn't related to the Paleo Diet directly. Anybody would recognize some catchy phrase but it didn't directly relate.

Then lots of small text that you couldn't read in the thumbnail form. And that also had absolutely no impact on the sales. At this point, she was watching some of my videos and realized I was focusing exactly on the very topic that she was interested in.

The topic is How Do I Get These Non-Fiction Books Of Mine To Sell? She saw I offer a free Discovery Session where we were able to map out your things. You can just check on that one if you're interested in a free session.

We can take a look at where you are at in your self-publishing journey. We can help you continue making more progress and increase your sales. So anyway, she booked this particular session with me and the thing was that we were looking closely at it.

And we discovered a couple of things. Often, a lot of these things are similar in people's books. But people say “Well, this probably doesn't apply to me.” So, 3 reasons non fiction books don't sell?

She'd even heard me say these very things. But she thought “Well that's probably not my book, that's probably somebody else's book.” So the first thing we discovered was that she wasn't targeting the keywords for the exact diet she was targeting in a paleo diet book.

She didn't even include the word paleo diet in the title or subtitle. So the first thing we did was we took a look at the absolute best sellers in the Paleo Diet genre, right in that niche. We saw that those books had a certain set of keywords.

We were using KDSpy which is the common tool that I use when figuring out which keywords to use in the titles. We were able to create a ‘word cloud’ where we could see the most used words in the best-selling books for paleo.

We said, how many of these words are you using in your title and subtitle? We discovered she was using none of them at all. Maybe the word ‘diet’ was in there but ‘paleo’ was not in there.

Check out this related article: How Can Group Coaching Help Self-Publishers?

Caveman Diet wasn't in there, she had some pictures of something that looked like a caveman. I don't know what other weirdo animal it might have been but it didn't register that it was this type of diet.

We also even noticed the covers for the other books, it didn't match her cover. It was completely different, her cover had some food on it. But it could have very well been just talking about hamburgers or something.

It wasn't clear with the value that was being done. So that was the first one, getting the keywords in place. The second thing was changing the very title and subtitle to ensure that those were in place.

We also checked to see that the paleo diet was no longer selling on all of Amazon. That was one of the things that KDSpy showed us. It may have been a fad diet at some point but its sales had seriously dropped.

So by pivoting a little bit off of the paleo diet and focusing on a partially different diet that could also do it. Another high protein diet or low-fat diet would also be an option like a Mediterranean diet or something like that. You would be able to do that or even look at some sort of keto diet.

Any of the diets that would have something in common, where the recipes would possibly fit was also an option that she could use. But in this case, it was probably a little bit late on the paleo diet. Since she had most of the recipes in that direction.

Things that showed up in those covers that she did not include in her cover meant that this was going to be something she could fix. So she started going through and considering the things that we had discussed during our discovery session.

By working through them one at a time, she suddenly concluded that “Yes, I will change my title to include paleo diet and the other keywords that the best-sellers are using.”

Number two, she changed and modified the cover. So that the cover itself was matching what was going on there. As a result, she started seeing sales coming in on her book.

It was not a flood of sales but this was actual sales for her book. And that helped her understand that for non-fiction books, this is what you're going to want to do. Make sure your title and subtitle are exactly what people are searching for.

Make sure you’re using those best-selling keywords. Make sure that your cover matches the best sellers in your genre. The third thing for these non-fiction books was making sure that you're even targeting the types of books that people are currently buying on Amazon.

Check out this related article: EASIEST Ads Strategy for KDP

So that in the long run, we're not just writing a book like in 2017 for fidget spinners that may sell a thousand copies. Then nobody wants to buy your fidget spinner book after that. So those 3 key issues to getting these non-fiction books were very important for her, the 3 reasons non fiction books don't sell.

During this transformation, she realized for her next book, she was going to move away from the paleo diet. And move on to a different diet that has been sitting around like the Mediterranean diet or the dash diet. Some of the other ones do a lot better in terms of sales.

She's feeling very optimistic because seeing sales of her paleo book, motivates her to keep on writing. And that's something else for you nonfiction writers, don't start writing lots of books without actually putting them on the market.

Letting the market tell us what we need to do to modify our books. To make sure that these books not only are produced but before we go writing our next book, we need to figure out that we have figured out a good product-market match between what we're doing and ignoring.

Because remember, when it comes to your non fiction books, we need to make sure that we're doing the marketing on this book as well. To get the sales that we're going to need to keep us motivated in writing books and seeing those sales for our future books.

So, those are the 3 Reasons Non Fiction Books Don’t Sell. If you want to see the same results as Sarah's getting, go ahead and check out the free discovery session. I'll see you in a discovery session. We'll go through and take a look at exactly what we can do to improve the sales of your books and the process that you're working on.

Are you fond of reading self publishing blogs? If not, then now is the time for you to check out these best self publishing blogs.Best Self Publishing Blogs for AuthorsOne of my absolute favorite ways of learning more about self-publishing and making sure that I’m on track is to follow the best blogs on the END_OF_DOCUMENT_TOKEN_TO_BE_REPLACED

Do you think your email marketing is ineffective? Haven’t tried ActiveCampaign yet? It might be the right one for your book email marketing. Holding Your Readers’ FocusYou may be thinking that just because you’re an author, you don’t have to pay any attention to marketing and especially not email marketing. Will you be making a huge END_OF_DOCUMENT_TOKEN_TO_BE_REPLACED

Are your books not selling that much? You could increase sales by changing your mindset in self-publishing.Making A Lot Of MistakesWhen I was first getting started with self-publishing, I figured that my number one problem was that the quality was not high enough. Things needed to be perfect before I’d be ready to put my END_OF_DOCUMENT_TOKEN_TO_BE_REPLACED

Are you looking for a tool that can format your book perfectly? I have found the best tool for formatting your book with Jutoh. Having Errors When Formatting Are you paying people to do the formatting of your book? If you’re making a huge mistake that is costing time and money, stick with me while END_OF_DOCUMENT_TOKEN_TO_BE_REPLACED