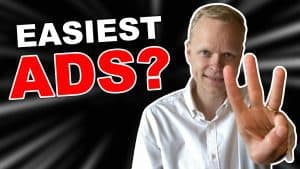 Have you been running ads but it doesn't seem to work? Let me tell you the easiest ads strategy for KDP that you can use.

So, it was about a year ago and one of my subscribers Suzanne got in touch with me. She was newly retired. And she suddenly had the time to start getting back into writing.

She was an avid gardener. One of the books that she had been working on was on orchids. It is her favorite flower, the one for which she'd study the most.

Because the thing with orchids is that you have to understand how to get things balanced if you wish to take care of them properly. I know because I have several friends and family members with orchids. They show me how much work is required.

Suzanne figured, why not write a book on a subject that she's enthusiastic about? She's finished working her main career. Now maybe moving on and trying something with a writing career was what she was going for.

The thing was that she had put the book together and she paid somebody for the cover. She got it all together and she put it onto Amazon. But the problem was that initially when it was released, she saw a whole pile of sales and then they dried up.

Check out this related article: Here's What I'd Do If I Had To START OVER

Her friends, her family, and the people who wanted to be supportive in her life had purchased those initial books. But at this point, it just wasn't clicking. Something wasn't right.

So, the thing is no one was finding her book on Amazon. Or at least not finding it useful if they were finding it. So, she was ready at this point to completely abandon self-publishing.

Put another book out and get it to sell and start building off of that. Something for which she had wanted to do her entire life. Because of her career, time, family, and such, she just didn't have time.

But as a retiree, she now had the necessary time but maybe it just wasn't working. She was completely ready to give up this whole thing about how to take care of flowers and become a recognized author in that field. She saw that there were other books on the market and doubted that her book itself was going to be good enough.

Came Up With Another Strategy

So, easiest ads strategy for KDP? The biggest thing was just when you see that you've put your book on the market, then you get that spike. Those initial sales drop off to nothing, it was completely depressing.

The second thing was that she then decided she came up with another strategy. She had heard of social media marketing and she took her book. What did she do? She took the link to it and just went around all the groups on Facebook that had discussions about orchids.

She just passed her book in there thinking that maybe that would cause people to buy her book. Now Suzanne was sorely mistaken because that did not work at all. The way that she was thinking it was going to work.

So, she joined my email list and got my Checklist and everything. Explaining the different steps and the key secrets to self-publishing. On the email list, I wrote some articles discussing the issue of how to use ads effectively and several core strategies.

I pointed out a couple of other strategies that weren't exactly on this email that she had read at this time. But some of the key ones here are running ads. If you see, you're not getting any clicks because you're starting with a base price of 15 cents per click.

You have a budget of a dollar, for example, if we get no clicks, we've paid nothing. So then, we double it, 30 cents a click and we put it at a budget of $2. We continue this game until we get to like 60 cents.

If we're still not seeing any sales, that shows us there may be a problem with the cover of the book. But the second strategy I mentioned to her, going back and forth on email, was that you can try easier markets for English-speaking languages.

The two other markets are the Canadian market for Amazon ads and the UK market. I, myself personally found the UK market was incredibly profitable. Now there was a time when almost any ad you ran on Amazon would be selling books like crazy.

But the thing is those days were over at this point. So, these were the two key strategies I was suggesting for her. She started following these strategies and getting her books there.

She suddenly saw an increase in sales coming from these ads. Because in your ad's analytics, you can see exactly where the sales are coming from. In other words, this ad triggered so many sales.

It cost you so much for the clicks that were going on there. But the conversion rates were really low. So, the solution after further back and forth discussions, was that she needed to change the cover.

Maybe the title, choosing a title that tells people “Buy my book and stop orchids from dying” or “how to make healthy orchids”. Some promising thing as opposed to “orchid heaven” or some other phrase that didn't even involve the word orchid in there.

Like “beautiful flowers” or whatever it is. But focusing on the keyword for orchids and looking at the keywords that are the most profitable, she was able to change her cover. It increased the effectiveness of the ads because the whole point of ads is it shows us how many people are seeing the cover and title.

Does it tempt them to buy? So, when these ads are in front of her target market, what exactly is happening? What eventually happened was she saw an increase in sales.

She also stopped doing the Facebook game of spamming people. They hate that, do not spam people. But she started engaging in these Facebook groups where she contributed now and then.

She mentioned the fact that she also has a book, it's in her profile. This is a key trick in addition to building an email list, we're giving away; see tips on how to take care of your orchid. Or a one-page cheat sheet on taking care of orchids.

To get people onto our list and continue with the ads. Running in multiple markets around the globe. This is what started to trigger an increase in sales and with the sales came to her motivation.

Check out this related article: Myths About Success in Self-Publishing

By hanging in there long enough and learning the right strategies. Understanding that running ads are not necessarily about making money from the ads. But telling us also if there's an issue with our target market not connecting.

Then using the entire ads network that Amazon has supplied. You can almost use it for free if people aren't even clicking on the ads. After running, my ads have been shown 120 million times to people.

So that's a key issue to this. When we see our income growth, we can increase our motivation. Our motivation, causes us to write new books, take courses, and do things that help us to stay in the game.

So, that’s the easiest ads strategy for KDP. Learn even better strategies. That's one of the reasons why I want you to check out my previous blog and video on Fast KDP Income Growth.

Are you fond of reading self publishing blogs? If not, then now is the time for you to check out these best self publishing blogs.Best Self Publishing Blogs for AuthorsOne of my absolute favorite ways of learning more about self-publishing and making sure that I’m on track is to follow the best blogs on the END_OF_DOCUMENT_TOKEN_TO_BE_REPLACED

Do you think your email marketing is ineffective? Haven’t tried ActiveCampaign yet? It might be the right one for your book email marketing. Holding Your Readers’ FocusYou may be thinking that just because you’re an author, you don’t have to pay any attention to marketing and especially not email marketing. Will you be making a huge END_OF_DOCUMENT_TOKEN_TO_BE_REPLACED

Are your books not selling that much? You could increase sales by changing your mindset in self-publishing.Making A Lot Of MistakesWhen I was first getting started with self-publishing, I figured that my number one problem was that the quality was not high enough. Things needed to be perfect before I’d be ready to put my END_OF_DOCUMENT_TOKEN_TO_BE_REPLACED

Are you looking for a tool that can format your book perfectly? I have found the best tool for formatting your book with Jutoh. Having Errors When Formatting Are you paying people to do the formatting of your book? If you’re making a huge mistake that is costing time and money, stick with me while END_OF_DOCUMENT_TOKEN_TO_BE_REPLACED