Myths About Success in Self-Publishing 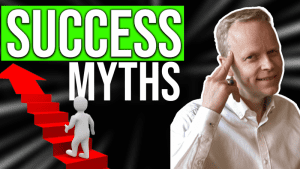 You might have heard about the success stories of some authors. But there are these myths about success in self-publishing that you should know. Find out today.

Ted asked me how exactly he was going to handle all of the emails coming in when he released his very first book. That's one of the reasons we're going to talk about myths about success in self-publishing today. So it happened about a year ago.

One of my viewers on Youtube, his name is Ted, came to me with a question. I had never heard anyone ask me that particular question before. Though, I had seen a lot of people with the same expectations that Ted had.

He had written it, he had formatted it. Everything was ready and he was going to release it. He wanted to be able to release this book, his next book. This makes complete sense since that's something I also advise.

His problem was “Once I release my first book, I’m going to be selling so many copies of this book. Many people are going to want to get in touch with me. My inbox is going to be overflowing on social media.”

“I don't know how I'm going to respond to all the messages that are coming in. From all of these readers who are buying my book. So that is going to get in the way of my goal, which is to put out another book.”

So he was coming to me with exactly this exact question. The thing was that he had seen the success of other people. The absolute top seller sometimes would literally just write a book.

Then they would release it on the market and it would explode. They would be seeing millions of sales or hundreds of thousands or whatever of their book as it hit the market. What was at stake was that he would be using so much time to respond.

Check out this related article: How This Tool Made Me A Best Seller

Based upon these thousands and thousands of readers and the people who are buying his book. How in the world was he going to have time to get his next book done? That would create a barrier.

He wasn't even sure how he should release the first book. Because once it comes out on the market, so many people would be buying it. It would slow things down.

So the first thing was he looked at these other books. He could see “Well, maybe if I don't give them my email address, they won't be able to contact me better.” The second thing he looked at was the quality of his book.

He realized his book was equally as good as the absolute best sellers. The only difference was he hadn't released his very first book. But he saw what happened with a lot of these media interviews and TV interviews.

And what about all of the papers and journals? All of these people wanted his signature and the emails that would be coming in. How in the world was Ted supposed to deal with all of this?

That's one of the reasons he got in contact with me. He had seen some of my videos where I was discussing issues like email lists and these other things. But of course, for him, he realized that when he came out with an email list, the list would be so full.

It will be full of people contacting him all the time. He wouldn't have time for anything else. But the thing I commented to him is that there are myths around this entire subject of self-publishing.

One of the key myths is the idea that if you publish it, your readers will come. That was a little reference from the ’80s, right? If you build it, they will come. Which film was that?

I can't even remember, let me know which film that was. It was a baseball film where the ghosts were telling me if he built a stadium, they would come. And these great baseball players of all time came.

So in his mind, “If I write the book, the readers will come.” This is a huge myth that so many new beginners or first-time authors discover very quickly. It is the fact that when you release your very first book onto the market, you will not see it explode.

Unless certain things are in place. But those things you need to get in place are not obvious. First-time authors are simply not going to remember.

They won’t be able to actually go about doing it. So the problem and one of the myths about success in self-publishing is that you will make thousands and millions of sales. And you will become the next major discovery.

Nobody knew you before and now you're just this huge. Being picked up by all these publishing houses and such. What happens is when you put the book on the market, you suddenly see no sales at all.

It's just pure crickets and you're like “I don't know what happened”. There are a couple of reasons that I explained to Ted on this specific issue. One of the ones was his book of course would not be optimized.

I asked him how the keywords are looking for this particular book for the exact subgenre? He's like, well it sort of applies to everybody. I don't have specific keywords. So we already know we're going to have a problem if we're not aware of even the role of keywords.

That's already going to put us behind. Then the second thing is the book sales page is not optimized to sell. So I was talking with him specifically about this idea.

How does your description look? Does it look engaging and pull the readers into your book? How about the reviews, how many reviews exactly do you have?

Do you have a review team that's helping you build reviews for this thing? What about your author's bio, is it built to sell? Is your book formatted properly to go about getting the sales you're going to need?

Are you choosing a pricing model that is going well? And the categories that we're choosing among other things. The cover itself, is it built to draw readers in?

Do you even know what that means? The problem here is each of these categories in optimization, for Ted, it was so impossible for him to know. Because after all, it's his very first book.

Then on top of this, if this were not already difficult enough, who knows maybe Ted already got a big following. It turned out Ted did not have a big following. Well at least maybe he understands how to run ads.

He'd never run any ads before so he didn't know how to do that. At least on content marketing, he's putting a lot of content out there to draw readers on. The answer was no, nobody.

He wasn't doing that either. This was his first book, he was using his time on this book. Because he knew that once it came out, then he would have this huge audience.

The problem is nobody had a clue who he was. So he was dealing with one of the myths about success in self-publishing. The myth of, if I write a book, all of these readers will come out.

Because the book is of such high quality. That the quality of the book directly translates to the number of sales. The second it hits the market and this myth is something that so many first-time authors have.

Even the fake gurus, they're continually telling you “Hey if you just write it and follow my secret formula, you're going to make a million sales.” And this is something I never promise anyone. I promise you I can tell you how to optimize a book.

But I can't tell you whether the book is going to sell a million copies. Though I have had students who did quite well following these exact strategies. But the thing is that he faced a huge surprise.

He did get a few purchases from people he already knew. Then it was a little bit of a trickle but nothing spectacular. These people were not even reaching out to contact him.

I mean he had his email address in the book, he decided to do that. Even though all of these people were going to be contacting him. And what about the TV shows, the papers, and all of these things?

He discovered like well, this wasn't at all what he expected. Then the key was he realized that his real problem was not what he thought it was. He thought it was a problem of controlling all of it.

Now that he would be a celebrity, he thought that was going to be the problem. But in reality, it was the opposite problem. It is handling the fact that your book isn't going to sell itself.

It isn't going to sell unless it's optimized unless we're doing marketing on it. Building a name for ourselves around the brand. And two, making sure we're choosing a niche and sub-genres.

That specifically is targeting a profitable niche. Where there are a lot of readers buying books. But very few books on that specific niche in particular.

You may even sub-niche so that your name can be associated with the exact type of book that you're writing. That's one of the reasons I told Ted to make sure he was at least going through my Self-Publishing Secrets Checklist.

You should just grab that particular checklist. It is designed to break down the key steps necessary. To not only get your book published but also get it sold.

This has helped thousands of people who have gone through the process. And also gets you in closer contact with me.

So that I'm able to tell you deals. And we're able to work through and map out a little bit of your self-publishing journey. Just like I did for Ted, so go ahead and check that out.

Are you fond of reading self publishing blogs? If not, then now is the time for you to check out these best self publishing blogs.Best Self Publishing Blogs for AuthorsOne of my absolute favorite ways of learning more about self-publishing and making sure that I’m on track is to follow the best blogs on the END_OF_DOCUMENT_TOKEN_TO_BE_REPLACED

Do you think your email marketing is ineffective? Haven’t tried ActiveCampaign yet? It might be the right one for your book email marketing. Holding Your Readers’ FocusYou may be thinking that just because you’re an author, you don’t have to pay any attention to marketing and especially not email marketing. Will you be making a huge END_OF_DOCUMENT_TOKEN_TO_BE_REPLACED

Are your books not selling that much? You could increase sales by changing your mindset in self-publishing.Making A Lot Of MistakesWhen I was first getting started with self-publishing, I figured that my number one problem was that the quality was not high enough. Things needed to be perfect before I’d be ready to put my END_OF_DOCUMENT_TOKEN_TO_BE_REPLACED

Are you looking for a tool that can format your book perfectly? I have found the best tool for formatting your book with Jutoh. Having Errors When Formatting Are you paying people to do the formatting of your book? If you’re making a huge mistake that is costing time and money, stick with me while END_OF_DOCUMENT_TOKEN_TO_BE_REPLACED