Can A Self Published Book Be Republished?

Couldn’t figure out what has gone wrong with your book and why it’s not selling? Here are the self-publishing mistakes to avoid for your books to be of high quality just like the top bestsellers on the market.Editing Back And ForthGary was getting ready to start writing his seventh book. The problem is that Gary END_OF_DOCUMENT_TOKEN_TO_BE_REPLACED

Keywords could play an important role in making your books visible on search engines. Learn how to use keywords on Amazon KDP now.Finding And Buying The BookBeth was really proud of the clever title that she had come up with a “Gardening” book except for one problem. This clever title was not being searched and END_OF_DOCUMENT_TOKEN_TO_BE_REPLACED

Are you fully determined to do self-publishing but don’t know how to write, publish, and sell an eBook? Let me tell you the key steps that will help you succeed in self-publishing.Developing A Self-DoubtTim deleted his entire manuscript off of his computer and was ready to call this writing thing quits. That’s one of the END_OF_DOCUMENT_TOKEN_TO_BE_REPLACED

Ever wonder how to get a book published correctly? Let me tell you how exactly you can do that based on my own experience.Knowing The Phases Of Self-PublishingKaren got back the draft version of her children’s book from the hybrid publisher and it was a complete mess. She was ready to give up but that END_OF_DOCUMENT_TOKEN_TO_BE_REPLACED

Are you struggling to sell your non fiction self-published books? Here are the 3 reasons non fiction books don’t sell that you need to know.Choosing A Catchy TermSarah told me nobody wanted to buy her recipes. For some reason, they were just not high enough quality. Well, she was very much mistaken and that’s the END_OF_DOCUMENT_TOKEN_TO_BE_REPLACED

Have you published your book and wanted to make some adjustments? You might be asking, is it too late to change my book? I will tell you the answer with some tips to help make self-publishing easier for you.Frustrated With A Terrible StrategyLarry told me, “I guess we should just count my first book as END_OF_DOCUMENT_TOKEN_TO_BE_REPLACED 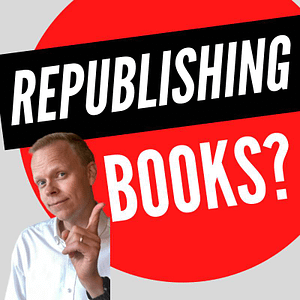 So you now have published a book and you're thinking if it would be possible to edit or revise it. Find out whether or not a self-published book can be republished.

Learn To Play The Game

Today's question has three answers and you're going to want to stick around. Because the third answer is a secret as to how republishing your book can get your account shut down on Amazon.

So, let's get into it. The question that was sent in today was, can a self published book be republished? This is a very common question because there are several reasons you might wish to republish your book.

One of them would be, what if you've had major changes in the book itself? You've done some editing, maybe put a new cover on it. You've got new content and you added a chapter.

There are some reasons you might want to do this. Maybe the book, it has been so long time ago and now you simply want to get it back out there may be on a different platform.

We are going to look at these answers to these questions today, so stick around. But before we get into the answers, grab a copy of my Self-Publishing Secrets Checklist. It will make sure you're not skipping any steps that are going to cost you sales on your book.

So, can a self published book be republished? Well, let's take a look. When I first got into self-publishing, my personal story on this one is that I would create books.

I would make modifications to the books. But then I would just push them back out as the same. So I personally don't have any experience with republishing a book.

Rather, we would just simply be reposting the content for the book so that the newest versions that are coming out or not really versions per se but in terms of fixing mistakes that have been found.

Some of my readers had found mistakes and then those mistakes were corrected. Grammar mistakes or other types of mistakes that might have slipped through the cracks during the editing process that I make those changes and revisions to the things.

Then I roll it out and it's still the same book with the same ISBN and all of these sorts of things. However, I can say that during this process, I have been in contact with lots of people in different forums and different locations.

Check out this related article: Where To Get An ISBN Number?

Those people who have been self-publishers, some of them are getting their accounts threatened and shut down by Amazon based upon some of this republishing. There's an entire game around this republishing issue and I'm going to get into that today.

So, can a self published book be republished? Well, the first answer is yes. You're free to come out with the new versions of your book. So you have Edition 1, Edition 2, and Edition 3.

This happens all the time. Sometimes, even people will take books that were published a long time ago and gone out of Print, and then they will republish them.

If it's out of the public domain, you are free to republish it under your own thing. Though there are some challenges and issues on that. Amazon will try to filter because they see the market getting flooded with these books that are low-quality and they don't like that.

But for you, you are free to republish your book. Nobody has any rules against this. However, I'm going to get into some of the details here.

The second answer is if you're making minor changes to your book and we're still talking about the exact same book, even if you're going to add another chapter, fix mistakes, put a new cover on your book, you could even change the title, then you're simply going to just re-upload those files.

We are of course talking about the digital version and not the print version. It is also what I have done previously many times as I improve the quality and the formatting of the existing books that I have.

If I'm coming out with new titles on some of the books to get better keywords, I can't change it on the print version because it would require a new ISBN. So generally, I will leave that alone but you can come out with new covers and such.

So, the title itself will stay frozen on audiobooks and print books. But in terms of the Kindle eBooks, you're able to redo them, changing the names, all of the metadata, the publishing company, and the author. All of it can be changed.

Check out this related article: What Is The Correct Format For Kindle Books?

This is a very important thing you're going to want to keep in mind if you're doing this. But now, let's get into the secret answer of the day. That is you can get your account banned from Amazon for publishing a book that they've previously restricted.

So they tell you your book violates somebody else's copyright. Somebody else has claimed that book as theirs. The material that you're using is ripped off the internet.

Maybe you had a ghostwriter write for you or something like that. And they were using the material so Amazon takes down your book. That's a warning shot against your books and to your account.

They will say, hey you're using content that you do not have the right to use. So, you've got this clever idea, "I've got an idea, I'll just republish it as a different book". Except for the fact that Amazon, they're in their algorithm.

The machine learning and the artificial intelligence they're using in their systems are going to just simply look and say, wait for a second, we just told you this content was forbidden and you're republishing it.

They could have other reasons too. The content is offensive or violates their terms and their agreements. It may be violating their policies, it's misleading, it's making promises, or it's hate literature or any of these sorts of things that would cause Amazon to flag this particular piece of content.

Your idea is that "they want to stop me there but I'll just republish it". This can get your account shut down. This is if they've told you they don't want that book, then do not republish that book on Amazon. So, that was our first issue.

The second issue is what if the original version is still on Amazon and your new version really doesn't differ by I think 50% or 20%. I can't remember but you should check up on this.

But it can't be like, "oh I've changed 5% of the book. I added a new chapter so I'll call it Edition 2. Now I've got 2 functionally identical books".

On Amazon, this is a violation of their terms as well. This can get your account banned. So, I would not suggest that unless we're talking about completely redoing the book.

So that if we compare the 2 manuscripts which Amazon will do, they're not going to find those 2 to be the same. Now, as I mentioned in previous blogs, if you're doing bundles, you can come out with a book that has both of those manuscripts together.

Because the content has got the entire manuscript of the first book but then it's got a second book and they put the 2 together. So now, it's a high enough percentage that is different than the original book. So, this is not going to create any problems with the books that you're publishing.

You will not get warning shots from Amazon against that. I can tell you one thing is the people I've seen who are making upwards of $10,000 a month, suddenly have their accounts completely shut down overnight for violating Amazon's terms.

Sometimes, they don't completely tell you what it is you did wrong or they do force arbitration. There are several ways Amazon has of messing with your account. It will be messing with you personally if you choose to violate these rules.

So, I would suggest following Amazon's rules. Do not do anything that would possibly find a little loophole or you find some little clever thing. They are going to catch up with you so it's not a good idea.

Check out this related article: How To Start Self Publishing With Amazon Kindle?

It is best to stick with their terms and conditions that Amazon has when you are going to be publishing your book. Do not republish a book that you already have out there or a book in which they have already told you they don't want that book on their platform.

So, those are just a few of the tips that I have found. Can self published book be republished? What have you found? Let me know below in the comments.

Have you published a book on Amazon? Have you received any of these warning messages? I would really love to hear from you.

I respond to 100% of all comments that are left below in the comment section. Check out my other blogs and videos for more answers to your self-publishing questions.