Can Self Publishing Be Profitable?

Couldn’t figure out what has gone wrong with your book and why it’s not selling? Here are the self-publishing mistakes to avoid for your books to be of high quality just like the top bestsellers on the market.Editing Back And ForthGary was getting ready to start writing his seventh book. The problem is that Gary END_OF_DOCUMENT_TOKEN_TO_BE_REPLACED

Keywords could play an important role in making your books visible on search engines. Learn how to use keywords on Amazon KDP now.Finding And Buying The BookBeth was really proud of the clever title that she had come up with a “Gardening” book except for one problem. This clever title was not being searched and END_OF_DOCUMENT_TOKEN_TO_BE_REPLACED

Are you fully determined to do self-publishing but don’t know how to write, publish, and sell an eBook? Let me tell you the key steps that will help you succeed in self-publishing.Developing A Self-DoubtTim deleted his entire manuscript off of his computer and was ready to call this writing thing quits. That’s one of the END_OF_DOCUMENT_TOKEN_TO_BE_REPLACED

Ever wonder how to get a book published correctly? Let me tell you how exactly you can do that based on my own experience.Knowing The Phases Of Self-PublishingKaren got back the draft version of her children’s book from the hybrid publisher and it was a complete mess. She was ready to give up but that END_OF_DOCUMENT_TOKEN_TO_BE_REPLACED

Are you struggling to sell your non fiction self-published books? Here are the 3 reasons non fiction books don’t sell that you need to know.Choosing A Catchy TermSarah told me nobody wanted to buy her recipes. For some reason, they were just not high enough quality. Well, she was very much mistaken and that’s the END_OF_DOCUMENT_TOKEN_TO_BE_REPLACED

Have you published your book and wanted to make some adjustments? You might be asking, is it too late to change my book? I will tell you the answer with some tips to help make self-publishing easier for you.Frustrated With A Terrible StrategyLarry told me, “I guess we should just count my first book as END_OF_DOCUMENT_TOKEN_TO_BE_REPLACED 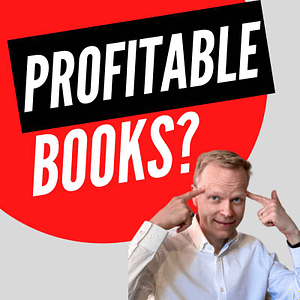 Self-publishing exists for many years already and a lot of people now are drawn to doing it. Learn more about it and know if self publishing can be profitable.

It Would Take Some Time

Today's question has three answers. The third answer is a secret to how making this one mistake will destroy the profitability of your books that you're self-publishing.

So, let's get into it. The question that was sent in is, can self publishing be profitable? The person who's asking this question clearly has created a book or is considering whether it's worth actually self-publishing a book.

To make some sort of profit, maybe a possible business and there is a lot. This is a question that is very common that many people wonder about when they're first getting started or considering whether self-publishing is the correct route for them.

On the internet, there is a lot of different options available. There are a lot of ways to make money but self-publishing is one that has gotten quite a bit of attention. It's something that you're definitely going to want to consider if you're looking at a way to make money.

Then, the question is that, is it profitable? That is a tricky question because it depends, but I'm going to get into that in just a little bit. Check out my free Self-Publishing Checklist that will help you get started right away in terms of making a profit from your self-published books.

So, can self publishing be profitable? Well, when I first started, I wasn't so much focused on profitability. I was just curious if you can get your books to sell at all?

And I had read stories and listened to podcasts of people who had a great deal of success. But that didn't convince me that I was going to have the same level of success that they had. So that was a key issue when I was first getting started with self-publishing.

Check out this related article: Where Can I Find A Good Self Publishing Podcast?

I put my books onto the market. I did not research it too much, which books should I publish. I just figured what do I know about.

Then I wrote books on those topics and put them onto the market. And I found that I was making a few sales. It was not enough to really call it incredibly profitable.

It would have taken months and months to earn my money back initially on those books. Because they of course were not optimized and I didn't even research the markets and such. So I found that it's profitable, after a couple of years I would probably make my money back.

There was a whole series of mistakes that I was making at the time. Even after a while, I began to wonder maybe I should look for something else. You know with Forex or fulfillment by Amazon or Drop Shipping.

There's a whole series of available that I thought maybe they would be more profitable until I learned a few secrets. One was advertising and the second one was choosing the correct market.

Both of these things made a huge difference for me. Because I thought you'd just write a book on something you're interested in. I didn't understand that you need to figure out that you're in the correct market.

You Should Be Optimizing

So, can self publishing be profitable? Let me get into the answers for today. The first is yes, if you optimize your content marketing and that is part of the key thing.

It is that if you can't just throw anything out there with any cover in any old market and assume you're going to make a profit that simply will not happen. So, that's a huge issue that I discovered.

Once I started optimizing my books, then I started seeing the sales start to pile up. And before long I would be earning back my money after just a few months on a given book.

So, the cost of the book versus the money that came back, it would not take that much time before I would get that money back. Then I would be pulling in a profit. For some books, it would be as quick as one month.

Check out this related article: Can Self Published Books Make Money?

For other books, it would take 6 months to a year to make the money back. You can't really know in advance which books are going to do okay. The second thing is that the average author on Amazon is only earning a thousand dollars per year which is terrible.

So, is it profitable? Not really if you look at the amount of time invested and such. They become demotivated and they quit writing altogether.

Of the 2 million self-published books that come out every year, many of them simply just don't sell. But they don't sell for a simple reason and that brings us into today's secret answer.

That is if you choose the wrong niche, then you will not make a profit. It's just that simple. So, in other words, we're not even talking about the content of the book and even necessarily the marketing that you do afterward.

But if you're choosing a niche for which there's already oversaturated, there are too many books in that market even if they are selling, you're not going to make a profit.

The second issue is that if the market that you choose is one in which nobody's even buying books, well then, you also will not make a profit. But you can get that combination, I use a program called Kindle Spy.

You will find that it will help you determine which books are selling for particular niches so then you're testing out keywords. You're making sure that you would say how much books exist for that keyword.

Then you're checking to see how many of those in the top 20 search results are selling 100,000 or more. So, in other words, the basic sales rank would be 100,000 or better. That would give you an idea they're selling at least a book a day.

Understand How The Game Goes

If the ratio looks pretty good, which I would say like 20 that is you take the total number that is selling. The total number of books divided by the number they're selling in the top 20 in the top 100,000 that comes up to like 20.

Then that would tell us we're in a very good niche that's profitable. The interesting part is as long as your book sort of looks like the other books in that same niche, so we're optimizing our content. And then running ads against those books.

So, this is something that a lot of people miss. They do not understand this aspect of things and as a result of that, they simply don't make the sales and the profitability that they ought to be doing.

They get demotivated and they quit self-publishing. So, many people come and go in the self-publishing world that simply make this single mistake. Choosing the correct niche and by the way, this works with any business.

You want to choose one that's profitable. Our goal is not to experiment and try to find a new profitable niche. Because here's the other interesting thing, let's imagine you discovered that there was a profitable niche let's say Nalgene, the best water bottles.

You were publishing books and you were the first to come out on that thing. You were making a lot of sales. People who are watching which niches are selling, they're going to notice that. And they will come up with copies of your book.

So this is how this game goes. You will make a little bit of a profit but even that will be taken from you very quickly. As other people will help maneuver you because what they'll do is they'll see that niche is selling.

They'll come out with their books and they will do a better job of optimizing and marketing. So their content and marketing will beat yours. And this happens all the time.

So our goal is not to try to create new traffic or find a new market, it is simply to find existing markets that are hungry to buy books at that point. We come up with books in those markets and as a result of that, we will see our sales start to go up.

Check out this related article: Most Important Factors For eBook Publishing?

We will definitely be profitable within those areas. This is something that is incredibly important. It cannot be overstated, so that's a huge issue there.

So, can self publishing be profitable? What have you found? Have you been profitable with your self-publishing?

Let me know below in the comments. I respond to 100% of all the comments that come in. Check out my other blogs and videos for more answers to your self-publishing questions.