You may be wondering if this year is a good time to do self-publishing. Should you self-publish your book in 2022? Or should you just wait for another year? Find out the answer today.Thinking About OversaturationTerry told me the market is completely flooded with books at the moment. So there’s no point in publishing one END_OF_DOCUMENT_TOKEN_TO_BE_REPLACED

Couldn’t figure out what has gone wrong with your book and why it’s not selling? Here are the self-publishing mistakes to avoid for your books to be of high quality just like the top bestsellers on the market.Editing Back And ForthGary was getting ready to start writing his seventh book. The problem is that Gary END_OF_DOCUMENT_TOKEN_TO_BE_REPLACED

Keywords could play an important role in making your books visible on search engines. Learn how to use keywords on Amazon KDP now.Finding And Buying The BookBeth was really proud of the clever title that she had come up with a “Gardening” book except for one problem. This clever title was not being searched and END_OF_DOCUMENT_TOKEN_TO_BE_REPLACED

Are you fully determined to do self-publishing but don’t know how to write, publish, and sell an eBook? Let me tell you the key steps that will help you succeed in self-publishing.Developing A Self-DoubtTim deleted his entire manuscript off of his computer and was ready to call this writing thing quits. That’s one of the END_OF_DOCUMENT_TOKEN_TO_BE_REPLACED

Ever wonder how to get a book published correctly? Let me tell you how exactly you can do that based on my own experience.Knowing The Phases Of Self-PublishingKaren got back the draft version of her children’s book from the hybrid publisher and it was a complete mess. She was ready to give up but that END_OF_DOCUMENT_TOKEN_TO_BE_REPLACED

Are you struggling to sell your non fiction self-published books? Here are the 3 reasons non fiction books don’t sell that you need to know.Choosing A Catchy TermSarah told me nobody wanted to buy her recipes. For some reason, they were just not high enough quality. Well, she was very much mistaken and that’s the END_OF_DOCUMENT_TOKEN_TO_BE_REPLACED 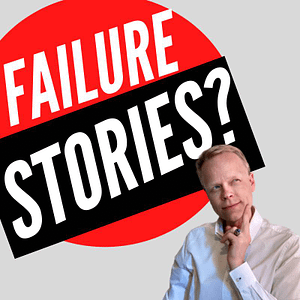 Today's topic has three points and you're going to want to stick around for the third point. Because it is a secret as to the one thing that these failure stories have in common and the thing you're going to do to overcome it.

So let's get into it. Today's topic is self-publishing failure stories. This is something that many self-publishers wonder a little bit about.

But failed to succeed at actually getting it onto the market or getting it to sell and those are the two biggest that are of high concern. Now, you may have heard a lot of success stories too. Both of these can have damaging effects on you.

But the failure stories are especially important to pay attention to. That is what we're going to hit in today's article. But before we get into the answers, check out my absolutely free Self-Publishing Checklist.

It will help you make sure that you are not skipping any of the important steps when it comes to self-publishing. So let's get into it. I'll start with my failure story.

And the thing is I published several books on several different genres. That was where I got started with self-publishing. I started with KDP and decided on getting the books onto the market but what's the problem?

I didn't go that well and hold it a second but I did take the books. I put them on a free promo through Kindle Direct Publishing so that people could get the books for free. I posted them on Facebook groups and Twitter.

Check out this related article: What Is The Truth About Kindle Publishing?

I even hired people on Fiverr to do additional promotions for me. And I started to see a trickle of sales, very very few sales were coming in and I was thinking this is not working. I had no ads, I asked my friends and families to do reviews.

Many had been taken down because they are somehow connected or whatever the case would be. And so no real reviews, no plan for it either. No targeting of one genre or spread out over some things.

I was still excited to see some sales but really not enough to make it long-term. So the thing that helps me is that maybe I should do some foreign exchange. Maybe I could exchange Mexican pesos or something else to see if maybe a different internet business would be right for me.

Because I realized I had failed at this attempt and that I wasn't going to be able to pick it up. Since I just do not have the right strategies or something I was doing wasn't right. Then I met some other people who have succeeded at self-publishing.

This turned everything around because of the success stories. Listening to the people who had succeeded share their secrets with you. That is the key to winning at the self-publishing game or any game in general.

The self-publishing game is what we're focused on. So I started incorporating the strategies and the tactics that they've mentioned. Then got in touch with even more people reading books, taking courses, and all sorts of stuff to figure out how can I crack this code because I was very hungry to do it.

So that was the thing that worked for me. But I was at the point where I was like, okay I think I'm done. Maybe I should try to move on to a different business I've heard like selling, drop shipping from Amazon was a good one, and a couple of other available options.

Previously, I've done many things on eBay but the Kindle books were the ones that I want to succeed. And it wasn't until I heard those strategies. Then I was able to start succeeding at Kindle Publishing.

Now, self-publishing failure stories? Let's get into the three points for today. The first one is there are a lot of failures, don't be fooled.

The number of failures is so unbelievably massive on the self-publishing front. It's unbelievable and there's a couple of reasons for these failures. The first thing is many people just can't follow the best strategies.

There's an awful lot of talking about what they want to accomplish. You may be even have written your first book but then just nothing, you were not able to move to the next step. That's something that I spend a lot of time focusing on.

Check out this related article: How Can Content Marketing Help Me Sell Books?

If you haven't already read my blogs and listened to my videos previously, this is one of the key mindset topics you need to get straight. If you're going to succeed at self-publishing, it's that do not stop do not get stuck on one single point.

Don't talk about all of the thousands of things you want to accomplish. Like millions of sales and those sort of things. We simply do want one thing at a time and we keep it easy.

Simple and easy is what we're trying to go for here with self-publishing. This is something that you can exactly accomplish if you put your mind to it. That's what I'm trying to help you do, give you a little bit of verbal motivation here on this one.

So let's move on to the second point for today. It's that expecting to make tens of thousands of dollars in just a few months. Now there are a few people who manage to do this but those people are few and far between.

Some people lie about what they get and how well they do. But these are things that haven't been done, I've seen it documented. So there is a possibility but don't say your expectations.

Focus On One Niche

But you've really got to put it down and stay focused. Now we're going to move on to the third point, the secret point of the day. This is what most people, all of our failure stories that come out.

This is the one thing they have in common and it is that they just don't stick to the one game. So the number two thing they don't do is they don't pump out books. The majority of people making a hundred thousand dollars or more a year on Amazon have at least 40 books.

That gives you an idea of something you might want to shoot for and each book you put out gets better than the previous one. Stick within the same genre, do not hop around as I did. It would do a lot more successfully and improve the quality of your books as you go.

Check out this related article: How To Write A Book?

High-quality books sell a lot more copies than low-quality and you might be wondering why? The answer is the reviews. If you're getting a lot of one-star reviews, your book is not going to sell.

Amazon is not going to push it, you're not going to make sales. But if you're in the right niche that's optimized on that side, your book is a high-quality book for which your very first one can't be.

They won't be high-quality so it's going to take practice to get better and better at the skill like anything else. Then, we get it in a maximum number of formats, like audiobooks, paperbacks, Kindle, eBooks, Smashwords, and EPUB books.

All of these different options available to us, all of these formats we're distributing across multiple websites. We are everywhere that can be found with ads and optimized books. We're going to see huge wins over a long time or over the long run.

The reason why this is so important for you is to remember you don't want to be one of the failure stories. But in reality, everybody has failure stories until you have succeeded at the exact thing that you are trying to do.

You don't want to get demotivated by the fact you put your first book out to see the sales you want to see. In fact, I wouldn't suggest you expect anything. Your first book is just to get it out and become familiar with the process.

We can optimize the book later and we continue to write more books. This is how the scheme goes, we're running ads against it, we're optimizing, and we're getting more clever with each round. These are just a couple of the things that the people who have failure stories do.

They just give up too early and they probably not following the best strategies. So don't try to be original if some things working for people. Just copy what they're doing and you will succeed at the self-publishing game, I can guarantee that.