Should You Consider Self Publishing Formula?

Couldn’t figure out what has gone wrong with your book and why it’s not selling? Here are the self-publishing mistakes to avoid for your books to be of high quality just like the top bestsellers on the market.Editing Back And ForthGary was getting ready to start writing his seventh book. The problem is that Gary END_OF_DOCUMENT_TOKEN_TO_BE_REPLACED

Keywords could play an important role in making your books visible on search engines. Learn how to use keywords on Amazon KDP now.Finding And Buying The BookBeth was really proud of the clever title that she had come up with a “Gardening” book except for one problem. This clever title was not being searched and END_OF_DOCUMENT_TOKEN_TO_BE_REPLACED

Are you fully determined to do self-publishing but don’t know how to write, publish, and sell an eBook? Let me tell you the key steps that will help you succeed in self-publishing.Developing A Self-DoubtTim deleted his entire manuscript off of his computer and was ready to call this writing thing quits. That’s one of the END_OF_DOCUMENT_TOKEN_TO_BE_REPLACED

Ever wonder how to get a book published correctly? Let me tell you how exactly you can do that based on my own experience.Knowing The Phases Of Self-PublishingKaren got back the draft version of her children’s book from the hybrid publisher and it was a complete mess. She was ready to give up but that END_OF_DOCUMENT_TOKEN_TO_BE_REPLACED

Are you struggling to sell your non fiction self-published books? Here are the 3 reasons non fiction books don’t sell that you need to know.Choosing A Catchy TermSarah told me nobody wanted to buy her recipes. For some reason, they were just not high enough quality. Well, she was very much mistaken and that’s the END_OF_DOCUMENT_TOKEN_TO_BE_REPLACED

Have you published your book and wanted to make some adjustments? You might be asking, is it too late to change my book? I will tell you the answer with some tips to help make self-publishing easier for you.Frustrated With A Terrible StrategyLarry told me, “I guess we should just count my first book as END_OF_DOCUMENT_TOKEN_TO_BE_REPLACED 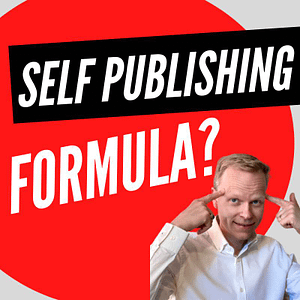 This is a question that most beginners have in mind, whether or not to consider self publishing formula. Find out the answer below as I share with you my very own experience.

Today's question has three answers and the third answer is a secret to how not taking a course like self publishing formula courses that are available can be a very expensive choice. It seems a little counterintuitive but we're getting into it.

So let's jump right on it. The question that was sent in today is, should you consider self publishing formula? Now, if you are not aware that Mark Dawson's courses, he has a series of courses that are associated with self-publishing formula.

He has a podcast, he is on Youtube as well. He is a successful author and sold millions of copies of his fiction books. He also teaches other people how to go about self-publishing.

But is it worth investing in self publishing formula? That is something that we're going to look at and explore today. But before we get into the answers, check out my free Self-Publishing Checklist.

You can just grab it. It will help ensure you are not missing any of the key steps to making money with self-publishing. So, should you consider self-publishing formula?

When I first started at self-publishing back in 2015, I came up with several books. I was doing relatively okay. Initially, I made zero sales but after committing a few strategies, I started seeing some of the sales going up on those books.

But that was during a period were suddenly the idea of running ads on Facebook became something very popular. I actually got in touch with Mark Dawson back in 2015. Where he was working on creating his Facebook Marketing Course.

Check out this related article: What Can You Learn On Self Publishing Reddit?

Because at the time, he was using Facebook to drive leads and to get a crazy amount of people that he would bring in through Facebook. Because he would give out his bundle of books in exchange for their email addresses.

They would know, like, and trust him. They would enjoy reading his books and then he was able to sell through their books in the series that he was working on. That was having crazy levels of success by getting these leads from almost nothing, just a very low amount of money.

He would have motivated me to start testing out ads on Facebook. Until Facebook started raising the rate of what it cost to run ads, where then people started seeing the lead cost going from maybe 10 to 15 cents a lead up to $1, $2, or $3.

Suddenly, for self-publishers, it became way too expensive. Since then, I have followed along with Mark Dawson and seeing what exactly he is coming up with. He has come up with some courses.

Not so much focusing on how you are going to make a killing with Facebook ads per se. He still does show you how ads work and things but he's moved a little bit away from just doing Facebook ads for authors and rather showing you generally the skills that of writing books that will sell.

He'll show you a lot of the aspects of what it takes to make the books sell. And also what your readers are expecting in the books that you are writing. So, should you consider self publishing formula?

Let's get into the answers. Yes, I would say it's definitely worth considering. Mark Dawson has plenty of great resources that are worth checking out. He's got some courses, some free things that will get you on his list.

But at the same time, he goes through a lot of things. You will also hear on Youtube from several various channels. I can only say, I don't say anything negative about any of the major authors that are out there or the people who are selling their courses.

Because I have been through many different courses that are out there. I take a closer look and these courses are costing around $297 or $300 apiece. You can get on the waiting list to take these courses.

It is definitely worth it if you aren't able to find a lower cost course. I am in a process of creating courses that are going to cost around the $50 to $100 range.

So, if you don't want to pay $300 for a course that can be a much more extensive and go through thousands of different things, I like to focus on things that go through just very very quickly on a particular theme that you are having issues with and get those problems solved.

But if you are looking for a more comprehensive course, these courses should be considered for that. Even though I would say a lot of the content is covered elsewhere. But that brings us to today's secret answer.

The answer is that it is better to pay money, a lot of money in fact, for a course that is going to help get you publishing as opposed to the alternative which is doing absolutely nothing. A lot of people who wish to be authors, they want to publish books, they simply never get started.

They don't take the initial steps. And one of the things you'll find is when you listen to different people, you will resonate. Perhaps you are listening to what I am saying here and thinking that yes, I am commenting on some things that definitely resonate with me.

You would like to hear more or buy more, I can do coaching, for example, it is one thing to get in touch with me if that's of interest. But I would just say that you should find somebody who you resonate with. Somebody who is going to be able to motivate you.

Check out this related article: What Is The Self Publishing Definition?

Where if you take their course, you are going to invest some money and you are going to feel stupid if you don't follow through and do what they said. That being said, a lot of people who buy courses simply never do the course.

The more money you pay, the more likely you will be willing to go through the course and get that value that is in the course assuming you learn something and you implement it very quickly.

One Who Resonates With You

But many people I know when I first started, I fell into this exact mistake which was not taking courses. I was thinking, oh I don't have much money to invest in the whole self-publishing thing.

So why don't I just go the free route? And what I discovered was that it's hard to stay motivated if you are doing everything for free and not investing anything. The second I started investing money, I thought stupid if I didn't follow through and with the entire process.

What exactly am I saying here? I'm saying that Mark Dawson's courses are worth investing if you resonate well with him and you have the money to spend. However, if you don't, go for a cheaper course that covers similar concepts.

Because it is not like it's inventing the will here. They are simply stating what a lot of other courses also will restate. You should choose somebody that you resonate with.

When you listen to them, hear their voice. You trust them, you know like and trust the person you are listening to. That will also impact your ability to make progress.

And that is a key issue that a lot of people don't pay attention to, the secret that many people aren't aware of. It is the fact that sometimes, you have to pay money to motivate yourself.

Check out this related article: Where To Find Contests For Self Published Books?

It is a head game. 80% of this all is about getting yourself to do things that don't come naturally. Turning off Netflix, shutting down video games, quit wasting time doing other activities if you really want to make succeed at self-publishing.

You are going to need to invest the time and maybe invest the money to motivate yourself. To make that progress that you know deep inside, you've got it, that you can do it.

I have taken cheaper courses that equally exposed me to all of the same ideas. Or have you watched enough Youtube videos and podcasts and read enough books? You can also get the information that way.

But I would highly recommend finding somebody you resonate with. Maybe that's Mark Dawson, maybe it's me, or maybe it's somebody else. Finding somebody and starting that journey one step at a time and making progress every single day.

So let me know below in the comments what exactly you found? Check out my other blogs and videos for more answers to your self-publishing questions.