What are the legal steps to publish a book about music It would include my own transcriptions of copyrighted songs.

You may be wondering if this year is a good time to do self-publishing. Should you self-publish your book in 2022? Or should you just wait for another year? Find out the answer today.Thinking About OversaturationTerry told me the market is completely flooded with books at the moment. So there’s no point in publishing one END_OF_DOCUMENT_TOKEN_TO_BE_REPLACED

Couldn’t figure out what has gone wrong with your book and why it’s not selling? Here are the self-publishing mistakes to avoid for your books to be of high quality just like the top bestsellers on the market.Editing Back And ForthGary was getting ready to start writing his seventh book. The problem is that Gary END_OF_DOCUMENT_TOKEN_TO_BE_REPLACED

Keywords could play an important role in making your books visible on search engines. Learn how to use keywords on Amazon KDP now.Finding And Buying The BookBeth was really proud of the clever title that she had come up with a “Gardening” book except for one problem. This clever title was not being searched and END_OF_DOCUMENT_TOKEN_TO_BE_REPLACED

Are you fully determined to do self-publishing but don’t know how to write, publish, and sell an eBook? Let me tell you the key steps that will help you succeed in self-publishing.Developing A Self-DoubtTim deleted his entire manuscript off of his computer and was ready to call this writing thing quits. That’s one of the END_OF_DOCUMENT_TOKEN_TO_BE_REPLACED

Ever wonder how to get a book published correctly? Let me tell you how exactly you can do that based on my own experience.Knowing The Phases Of Self-PublishingKaren got back the draft version of her children’s book from the hybrid publisher and it was a complete mess. She was ready to give up but that END_OF_DOCUMENT_TOKEN_TO_BE_REPLACED

Are you struggling to sell your non fiction self-published books? Here are the 3 reasons non fiction books don’t sell that you need to know.Choosing A Catchy TermSarah told me nobody wanted to buy her recipes. For some reason, they were just not high enough quality. Well, she was very much mistaken and that’s the END_OF_DOCUMENT_TOKEN_TO_BE_REPLACED 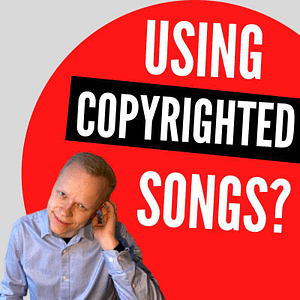 For any copyrighted properties, you have to keep in mind that someone owns them and that you can't just use them as long as you want. Find out the legal ways that you need to go through to be able to publish your book with copyrighted songs.

Don't Get Into Trouble

Today's question is, "What are the legal steps to publish a book about music? It would include my transcriptions of copyrighted songs." So that was a question that was sent directly to me a little earlier this week.

We will take a look at this one. It's an excellent question and so the real thing is, where do you start? what are the legal steps? The hard part about it is that we have an idea of a great book.

We know people would want to read it. It's discussing songs that people would like to see the transcriptions for but we don't own the rights to the songs.

So, how can we publish a book without getting ourselves in trouble for using copyrighted songs or property of other people in particular music companies?

Check out this related article: What Are The Mistakes To Avoid When Marketing A Self-Published Book?

Before I answer the question, you should check out my Self-Publishing Secrets Checklist that I created. It helped me publish over 170 ebooks. So you're definitely going to want to check that out.

Now, let's get right on to it. Well, my story, I can't say that I have done the music side but I can say from cookbooks. I discovered on cookbooks at least when I was publishing them, the recipes are not protected.

I have also seen other people get in trouble for using animated series or videogame characters and things like that without permission in their books. That has created a big problem.

On the music front though, this is a little bit trickier. Because the people who own the rights to it do not want people to just borrow their music. Take the text or figure out the tabs or chords to it and post that out on the web.

Or even sell books, that would even get them in more trouble without contacting them. Where this gets especially tricky is the fact that getting contact with them, they will only do it through contracts.

They are not just going to send you an email and say go ahead and make money off of the book that we've come up with. They are only going to be dealing with bigger name people. So this is where it gets very very tricky.

And so the short answer is, it is probably not a good business model to try to make books off of other people's content like that. It is not because it's a bad idea and not because people wouldn't be interested.

Check out this related article: What is the greatest misinformation you have read about book publishing?

By that point, they would be contacting you and they would have lawyers and such to make sure those contracts are looking good. If you do it without their permission, that creates also a bunch of problems because of course they could sue you.

They can come after you figuring out but often they won't. They probably just contact Amazon to tell you to take your book down. That's the reality of it.

They don't even contact you directly and that's what normally has happened. But I am not a lawyer so I'm not telling you what you should or shouldn't do. You should of course contact a lawyer yourself.

Consult With A Lawyer

But I have been in touch with many people who are in this exact same situation. Looking to see, "how do I get the rights for a celebrity or musician or whoever it might be to include their information or their intellectual property inside of my books?"

The answer is always it is insanely difficult to get them to let you do that. So that's a little unfortunate there. I hope I could have been a little more help to you.

I can't say that if you do it for free and publish stuff, usually they tend to leave most people alone on that. But even then, the recording labels do not like people publishing lyrics or publishing the chords to their music.

I have seen problems with that in sites getting takedown requests as a result of exactly that. You would think people just want to be able to play their music which would probably trigger more sales.

In fact, many of these record labels even got their starts by people passing around tapes, copies in the 80s of their music. And now they sued them once other services came out while distributing their music without their permission.

So that's the short story version of it. You would have to talk with a lawyer again regarding contracts. All this sort of information upon what you can and can't do and how much music you can include.

Check out this related article: How To Write A Self Publishing Copyright Page?

Though I haven't ever seen anyone who can make money doing this route or even getting permission in the first place, it is very difficult. But maybe for smaller time artists you might be able to do that.

Maybe you found that it wasn't so painful or have some tricks. Please do share them in the comments below and check out my next blog regarding your other self-publishing questions.