How To Write A Book In Less Than 24 Hours

Couldn’t figure out what has gone wrong with your book and why it’s not selling? Here are the self-publishing mistakes to avoid for your books to be of high quality just like the top bestsellers on the market.Editing Back And ForthGary was getting ready to start writing his seventh book. The problem is that Gary END_OF_DOCUMENT_TOKEN_TO_BE_REPLACED

Keywords could play an important role in making your books visible on search engines. Learn how to use keywords on Amazon KDP now.Finding And Buying The BookBeth was really proud of the clever title that she had come up with a “Gardening” book except for one problem. This clever title was not being searched and END_OF_DOCUMENT_TOKEN_TO_BE_REPLACED

Are you fully determined to do self-publishing but don’t know how to write, publish, and sell an eBook? Let me tell you the key steps that will help you succeed in self-publishing.Developing A Self-DoubtTim deleted his entire manuscript off of his computer and was ready to call this writing thing quits. That’s one of the END_OF_DOCUMENT_TOKEN_TO_BE_REPLACED

Ever wonder how to get a book published correctly? Let me tell you how exactly you can do that based on my own experience.Knowing The Phases Of Self-PublishingKaren got back the draft version of her children’s book from the hybrid publisher and it was a complete mess. She was ready to give up but that END_OF_DOCUMENT_TOKEN_TO_BE_REPLACED

Are you struggling to sell your non fiction self-published books? Here are the 3 reasons non fiction books don’t sell that you need to know.Choosing A Catchy TermSarah told me nobody wanted to buy her recipes. For some reason, they were just not high enough quality. Well, she was very much mistaken and that’s the END_OF_DOCUMENT_TOKEN_TO_BE_REPLACED

Have you published your book and wanted to make some adjustments? You might be asking, is it too late to change my book? I will tell you the answer with some tips to help make self-publishing easier for you.Frustrated With A Terrible StrategyLarry told me, “I guess we should just count my first book as END_OF_DOCUMENT_TOKEN_TO_BE_REPLACED 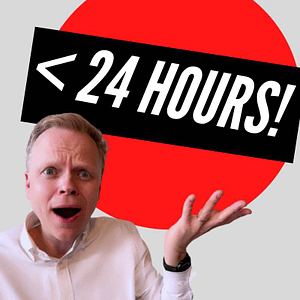 You might be wondering if writing a book in just a day is possible, well let me tell you my own experience. Check this out to know how to write a book in less than 24 hours.

Today's article has three points and you're going to want to stick around for the third point. It is a secret as to why you might wish to write your book in 24 hours.

So the topic of today's article is how to write a book in less than 24 hours? Now, perhaps you're first getting started with writing or you've been writing for a while. And you're just wanting to challenge yourself.

You're wondering a little bit upon maybe how fast could you produce a book? So you're starting to get into this process and you're thinking "is it even possible to do this?". Or maybe this is a little bit too much of a challenge.

There's a number of these challenges like in November, there's the NaNoWriMo. The idea of writing 50,000 words in a month. So it's not too far off from this same concept of challenging oneself with something along the lines of how quickly can you write and produce a book.

Maybe you want to do it to make money off of it or maybe for some other reasons. But you're wondering is it even possible? Well, that is what we're going to explore in today's article.

Grab a copy of my free Self-Publishing Checklist. To make sure that you are not skipping any of the steps necessary to win at the self-publishing game. So check out that secret checklist.

When I first got started, one of the very first books I read was how to write and self-publish a book in 28 days. Now, this was along the exact same lines. We're not dealing with 24 hours but 28 days.

Check out this related article: How to Self-Publish Your First Book: Step-by-step tutorial

So what happened was I started exactly jumping in on this and writing a thousand words a day. And after 15 days, I had written my very first book at 15,000 words. The book was not that low of quality because it was a subject I was very excited about and I had been studying for a very long time.

In this case, it would be a goal achievement, so then did I make the goal? Well not exactly, I did succeed in writing the book in 15 days with 1,000 words a day. Some people call it putting your butt in the chair which is the key to making progress.

Not talking about the book but actually writing the book. The next thing is I had to do editing on it, I had it through 2 rounds of editing. I had an email list building trying to figure out how that all works when you connect it into a new website and domain that was building around it.

And also doing the cover creation that took a lot longer than this book had told me that it was going to take. I mean I did get a cover initially and it was terrible. I just didn't have an idea how to do the covers at a reasonable price at the time.

Now I use of course Fiverr, you can check out my affiliate link for the person I use on Fiverr to do the covers. Which are amazing compared to at the time it was like $80 to do a cover was unbelievable. But the thing is I ended up getting my book out.

It was not in 28 days, it completely failed at that. But it was more like for months. But it did help me understand the concepts involved with putting a time limit on when you're going to do something.

As some people would say in terms of at the university would say if you wait to the last minute, it only takes a minute. And that is exactly that law that we were just discussing. Where it starts to kick into gear, I think that's the Parkinson's law.

But that's an important point, that's one of the reasons why putting dead limits on ourselves. Deadlines are a very powerful tool for making sure that we're getting things done. Even if the outside world is not pressuring us to do it.

We are not talking and writing a hundred thousand word book. I would say though that you should not go underneath 3,000 words. Because you can't make a paperback book out of it if it's under 3,000 words.

So you're going to need at least 3,000 words and then that will probably help you out at achieving your goal. And making sure that you're like every hour putting in a thousand words. This is possible, I think I can type at a rate of a thousand words in about 20 to 30 minutes.

I was editing and making sure that everything looked okay. But just as a basic thing you might want to figure out your speed on this to figure out how doable this is. And how many words your book is going to need to be ideally it will be on a topic for which you're already familiar.

Because it's a lot easier or a story for which you've already come up in your head. That will be something that will save you a lot of time. We're not talking or writing a book on a subject we know nothing about, it has to be something we know stuff about.

Check out this related article: Grammarly Reviews: Is it Good and Should You Pay For it

You can also use Open Office or Libre Office or Grammarly, run it through these particular tools. Make sure that we're using the right and necessary tools to win at this particular game without paying any money or waiting on anybody else to do the work. Let the tools do it for you.

Then we're going to use Canva and their template for covers. You can pull in some of their free pictures or use Pixabay to find some free pictures to throw under your cover. Stick with their fonts and stuff for their example Kindle books.

This is a completely doable task. But the secret answer of the day is why exactly would you want to do this because wouldn't it just make a terrible quality book? And the answer is no because the goal is not a top-quality book but rather the knowledge that it is possible.

And that you have it in you to get the book out there. In some ways, it also is fighting against the perfectionist side of ourselves. Trying to make everything flawless and perfect whenever we're trying to achieve this goal of getting our book onto the market in a very short period.

I'm not arguing that the quality is going to be very high. I'm just saying that sometimes pushing ourselves out of our comfort zones can be very helpful. Helping to establish the fact that we can do this project is completely doable.

You have everything you need in yourself. We can do this project free without paying a single penny to get it onto the market. Then see what happens.

If it's a terrible book, well then it will do terribly. But the reality is sometimes we take these risks. We take these challenges, put them under a pen name or whatever, it doesn't matter.

But I'm just saying it's good to stretch ourselves and to show ourselves that we can do it like NaNoWriMo. The idea is you put that 50,000-word book you create. Then we put it onto the market or you edit it and you go and fix the thing afterward.

Some people find that to be a very helpful way. So maybe you don't put it on the market but at least you have a basic manuscript. You're writing I think they call them Pantsers, you're writing from the seat of your pants.

Check out this related article: I Used Ghostwriters on Fiverr... This Happened

I think Stephen King was one of these people but he's just naturally gifted. So that probably doesn't hurt either. Now, how to write a book in less than 24 hours?

What is the shortest number of days you have written a book? I told you mine was 15 but I want to hear from you below in the comments. And check out my other articles and videos for more answers to your self-publishing questions.