Is Self Publishing Amazon Kindle Worth It?

Couldn’t figure out what has gone wrong with your book and why it’s not selling? Here are the self-publishing mistakes to avoid for your books to be of high quality just like the top bestsellers on the market.Editing Back And ForthGary was getting ready to start writing his seventh book. The problem is that Gary END_OF_DOCUMENT_TOKEN_TO_BE_REPLACED

Keywords could play an important role in making your books visible on search engines. Learn how to use keywords on Amazon KDP now.Finding And Buying The BookBeth was really proud of the clever title that she had come up with a “Gardening” book except for one problem. This clever title was not being searched and END_OF_DOCUMENT_TOKEN_TO_BE_REPLACED

Are you fully determined to do self-publishing but don’t know how to write, publish, and sell an eBook? Let me tell you the key steps that will help you succeed in self-publishing.Developing A Self-DoubtTim deleted his entire manuscript off of his computer and was ready to call this writing thing quits. That’s one of the END_OF_DOCUMENT_TOKEN_TO_BE_REPLACED

Ever wonder how to get a book published correctly? Let me tell you how exactly you can do that based on my own experience.Knowing The Phases Of Self-PublishingKaren got back the draft version of her children’s book from the hybrid publisher and it was a complete mess. She was ready to give up but that END_OF_DOCUMENT_TOKEN_TO_BE_REPLACED

Are you struggling to sell your non fiction self-published books? Here are the 3 reasons non fiction books don’t sell that you need to know.Choosing A Catchy TermSarah told me nobody wanted to buy her recipes. For some reason, they were just not high enough quality. Well, she was very much mistaken and that’s the END_OF_DOCUMENT_TOKEN_TO_BE_REPLACED

Have you published your book and wanted to make some adjustments? You might be asking, is it too late to change my book? I will tell you the answer with some tips to help make self-publishing easier for you.Frustrated With A Terrible StrategyLarry told me, “I guess we should just count my first book as END_OF_DOCUMENT_TOKEN_TO_BE_REPLACED 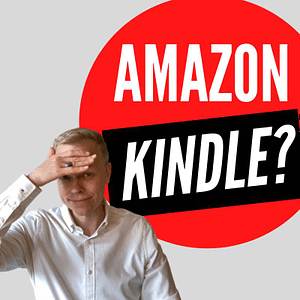 Choosing where to self-publish is a tough decision to make. Find out if self publishing Amazon Kindle is a great option or you just have to do it in some other better places.

Today's question has three answers and the third answer is a secret as to how you can lose everything through Amazon if you get this question wrong.

So, let's get into it. The question that was sent into me is, is self publishing Amazon Kindle worth it? This is a question that very many people have.

You're wondering maybe you should self-publish somewhere else. Or maybe there are other options available, traditional publishing or other sites.

This is a very very common question that many people wonder about. They are just not sure what exactly is the correct answer. So, we're hoping that we can answer it today.

But before we get into that, check my free Self-Publishing Secrets Checklist to help you get started with self-publishing.

It seems like an awful lot of work. You haven't done it before. What are the Mobi files? How do you get covers created, as well as the descriptions and keywords?.

There are just so many things that you're going to try to figure out during this process. When I was going through it, I found it very stressful.

I found it tried to push me to not make progress regularly. Because I was like, wow, maybe I'll need to think about this. Or maybe you need to take some more classes.

Maybe you need to read some more books on the subject. There are lots of reasons why when you first get into Kindle Publishing, you're just not sure a little bit.

Whether this is the right route for you. Whether it is going to be easy. But for me, I found that it was the correct route.

So, is self publishing Amazon Kindle worth it? Well, let's get into today's answers. The first answer is yes, it is definitely worth it as we say.

Check out this related article: Where To Start With Self Publishing For Kindle?

Second, there is no place that is easier to start with a bigger market than Amazon Kindle. You've got an enormous sized market. With tons of people with their credit cards already connected to the account.

With a single click of a button, they can make a purchase. They are there looking for books to buy. It's not like for example, if you go into Facebook or other locations and try to attempt to sell your books.

Maybe you've tried it, for those of you out there who already have books on the market. I have 170 books and I have tried everything.

If you look at all the books that I have thrown out onto the market, you'll see that some of them sell better than others. These were the early days also of my experimentation before I realized a whole bunch of tricks.

But I just leave them out there. They continue to sell from time to time. I have put different books on the market for the last several years. So, that's not a bad thing but the fact is yes, they do sell there.

The Power Of Amazon

The market is enormous and so this is something you are definitely going to want to do when you're first getting going. It is to get your books onto Amazon.

That brings us to our secret answer of the day to is self publishing Amazon Kindle worth it? The answer is not only yes it is but you shouldn't just stop at Amazon.

Even if it's the best. The problem is that Amazon hat is notorious for shutting down accounts. They do not want to give you a reason why they did it.

They have done it to many people where they'll just freeze the account and tell you that you violated the terms and agreements. It's usually a robot that does the check.

Then they'll inform you later. That way, they won't tell you what you did. Because if they did, you could sue them or something like that.

In terms of the agreement, it's that you will by forced arbitration, that's how they will resolve it. Which means they can even keep it secret to what the reasoning was.

So you are not going to be able to bring in a bunch of lawyers or whatever to straighten it out. They control it, you're sharecropping with Amazon so it's their field.

They determine the rules. They are a huge field with lots of customers, people who want to come and buy what you're growing or these books that you are putting out there.

But at the end of the day, they can shut the account down. There is almost nothing you're going to be able to do to get it back reinstated. Now I would say if you ever get a threat from Amazon, you need to respond to it immediately.

Check out this related article: Is Self Publishing On Amazon UK Difficult?

I have received such things in the past and they have allowed my account to continue. I never had any problems. I contact them immediately.

We straighten out any confusion and we continue down that road. But I have friends also and other self-publishers who just see their accounts completely freeze out.

It is because they have violated something. They may not even understand what they violated and before they know it, all of their revenue is gone.

If you are not on KDP Select which I would suggest doing so that you can run ads against your Kindle books. Otherwise, I would use Smashwords and that gets your books in EPUB format.

It is the format where you can put your books out on a whole pile of other sites like Apple and iTunes and some other locations. That gives you the ability to have revenue coming in from other sources.

In addition, Ingram Spark is fantastic for pushing your paper books to different places that Amazon KDP Print-on-Demand can't do.

Lulu is fantastic for doing your hardcover books at the lowest price possible. As well as the highest quality for people who only like to read on the hardbacks.

The Reason You Self-Publish

All of these are just different ways of making more money off of the books that you've already written. Each time you find somebody, you're finding new readers for your books.

That will just increase the sales of those existing books that you have on the market. It is true also with regards to Amazon, I've heard some people, they don't want to do it.

Because Jeff Bezos send these and the people behind it have so much money. They're dominating and they have monopolies.

For me, I can understand at a principled level maybe you're opposed to Amazon as a monopoly. Or in terms of the amount of dominance that they have.

For me, the key is trying to sell your books and reach more people that can help in the world with the books that you have. If that's the scenario, then we should be willing to sell our books.

No matter where they are. No matter which website and no matter who is selling those books. There is no reason we should boycott making money.

In reality, we hurt ourselves. Companies like Amazon are not going to be taken down simply. Because somebody like us isn't willing to put our books on their site.

In fact, we should try to distribute our books in as many areas as possible if the price doesn't cost us that much. In Amazon, it's completely free when you put your books out there.

Check out this related article: Is Self Publishing A Good Idea?

But you should, as I say with today's secret answer, you should not stop with just Amazon. You need to make sure that it's on these other locations in case Amazon were to shut down or freeze your revenue.

Even though Amazon could have stopped that but digitally with their computer program, they decided to let them adjust the prices. As a result, they went after them for increasing their prices too quickly in a Christmas period.

And suddenly they took half of that revenue, so Amazon just took $20,000. Nothing threatened them that they could shut their account down if they kept doing that.

So, this is something to keep in mind. You want the money coming in from other accounts. But Amazon for me is clearly the winner.

Is self publishing Amazon Kindle worth it? What have you found? Go ahead and let me know below in the comments if you found that maybe some other location is better.

It is that we are trying to stay within those lines, nothing black hat. Sometimes, going into the gray area can be very profitable. Sometimes it can cause you a loss of an account.

So you need to be careful with that. Let me know below in the comments what you found. Check out my other blogs and videos for answers to self-publishing questions just like this.