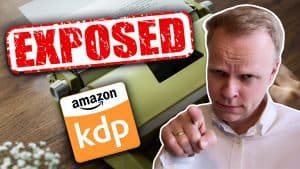 What do you think about this monopoly issue with Amazon? Here’s confronting Jeff Bezos and exposing Amazon KDP monopoly.

Losing Money On The Process

Jessica was sick and tired of monopolies and large companies dominating the entire self-publishing field. This was one of the reasons why she decided that she was not under any circumstances going to put her books on Amazon.

Or any of the major companies that control current self-publishing and book sales in general. But was this the right strategy? That's one of the reasons why in today's article, we are going to discuss confronting Jeff Bezos | exposing Amazon KDP monopoly.

The thing is that Jessica is from the Netherlands. She's been writing books for many years. The type of books that she likes to focus on is art books because she reads a lot of them and she has a background in art as well.

So, it only makes sense that she would put together books that she knew people would wish to read. But she decided that one of the best ways that she could go about selling her books would be selling them at art book fairs, festivals, and gatherings.

Where there are art things that are already going on. Where they have the displaying of art and then you would have your books that would be there. But the problem is that she just wasn't seeing enough sales coming in to cover the costs that she had associated with her books.

At the same time, she had friends who were selling their books on Amazon KDP. But the question was, is this a good idea? After all, there are principles here about monopolies and large companies.

And if she sells her books, isn't that just giving more money to the major publishers? As opposed to what she could do by just doing it herself. Or trying to find some smaller publishing companies that would be able to push the books through other companies.

Check out this related article: Is Amazon KDP Worth It?

But the thing is that if she wasn't going to be seeing any more sales than she currently had, she was losing money on this entire process. She decided that maybe it would be better not to release another book. After all, it is possible that the audience wasn't interested.

The audience was just too small, the people who'd be interested in purchasing these types of books that she was doing. So, the first thing she did was she bought a pile of her books. She brought them out to a stand at an art festival that was happening in Amsterdam.

The problem was that she didn't see any books sell. Only a couple of copies sold but that just wasn't enough to compensate for all of the art books that she had purchased. To hopefully make enough sales to make this worth her while.

The second thing she did was she set up an entire website to get the books to sell. So she could sell them herself personally to get things moving. The problem was that she got a little bit confused and lost in the weeds when it came to setting up a payment gateway.

As well as in setting up a fulfillment center. So the idea would be people could come and give their credit card numbers. Then that would go through and make the sales.

So that was the second option that she was looking at. It just wasn't working for her. The thing was that she jumped on, she got my email list.

I immediately then sent her a copy of all of my emails. I put out my link to my Volley app profile so that we can communicate 1-On-1 and figure out what issues you're having and how to solve them. So she got in touch with me through the very easy-to-use and free Volley app.

Making Enough Sales Is The Goal

We were able to start looking at her specific problem. The first thing she explained was very important. It was that Jeff Bezos had done way too much in terms of controlling the entire field when it comes to self-publishing and books in general.

But just by expanding Amazon so large, it had taken over a lot of smaller companies. She didn't want to contribute to any of this. So, she was out of principle not going to put her books onto Amazon.

Well, that was when I started telling her my personal story. When I was getting started and looking at also some of these monopolies. Thought maybe it isn't a good idea but then I started talking with a lot of people.

I realized that this is where all the sales are coming from. Your customers may not agree with your exact principles when it comes to where exactly the books are going.

The reason Amazon has such a large company is that there are so many people searching daily with their credit cards out, ready to click the Buy Now button and purchase our books right off Amazon. That is hard to get past.

You've tried other sites like your own personal website or these fares and stuff and just wasn't seeing the things coming through. In my own story, I also saw the same challenges if we were going to do some sort of not going through the Amazon route.

So, I commented that she needed to define her ultimate goal. If her goal was to punish Amazon, Amazon wasn't losing that much. It wasn't going to make that much of a difference.

Whether she put her books on Amazon or whether she chose to put them nowhere at all. It didn't make that much of a difference to Amazon. The second thing was if her goal was to make enough sales.

That she would have money coming in. Wouldn't it be possible that she could take the money coming from the sales if she had her book on Amazon and run it through to her causes? Like she could have it going through smaller book publishing companies or smaller sources like that.

In other words, “supporting mom and pop” is sort of a deal. When it comes to pushing her art books and at the same time not necessarily running that money straight back through Amazon. But using Amazon's own money and the money they're helping you earn to support the causes that you were supporting.

After all, if you make no sales at all, then you're not making an impact at all. And all you're doing is hurting your customers. Those people who would love to see the books that you have are art books in Jessica's case.

Getting them onto the market and in reality, those people would never see those art books. Because she was simply out of principle, making decisions that would result in no sales at all. Being a self-published author after all is a difficult thing.

I do not tell you this is going to be an easy thing. But I can tell you if you choose a profitable or semi-profitable niche. You keep on putting out books over 2 to 3 or 3 to 5 years.

Feeling Fantastic About Your Decision

That was something that I discovered with my books. As I'm seeing even my audiobooks just recently getting closer to 37,000 sales on the audiobooks alone. These sales each go back into helping produce more books.

Producing more audiobooks, producing more value for the world. To meet a lot of demands and needs that the world has. For the type of books that we want to put onto the market.

It just made no sense to simply deprive the world of our books just because of which company it was going through. So, the thing is that I recommended that she give Amazon a try. We were able to discuss this through and she still was not completely convinced when I did in the discussion with her.

The thing is that maybe you also have a similar sort of problem that you were sticking with your books. That either result in no sales or difficulty getting stuck on the self-publishing process. That's one of the reasons I have my free Self-Publishing Secrets Checklist.

You can grab it to make sure that you are not making these mistakes. You can talk with me 1-On-1 on the Volley app and you'll get the link immediately after you subscribe to this particular link. So that we can discuss your issues.

You don't have to just use the value of the checklist. But if you'd like to, we can go back and forth and do a little bit of a discussion on some of the issues that you're having with self-publishing.

Well back to Jessica, the thing was she thought about her current situation. She realized that nobody was winning by simply making no sales. So, she decided she would put her book on Amazon and start marketing in that direction.

Check out this related article: Optimize Your Amazon Book Page

What happened was that she started seeing organic sales. Something that had never happened when she tried it through these other routes. This idea was always people she knew who were buying from her.

But now it was people she never knew. People around the world were making purchases of her books. But she decided she was going to use the money that was coming in from them. To try to push her publishing companies or smaller houses.

The mom-and-pop type places where you're able to get your books on the market. But she was not going to take her books off of Amazon to do this. Rather, she was going to support them but support them with the very money that she was making through the sales of her books.

The second reason was that she was feeling fantastic about the decision that she had made when it came to her books. It was that she wasn't going to have zero sales. Meaning, that she would be demotivated.

So, she would still be able to serve her hungry audience with the art books that she was putting on the market. At the same time, not necessarily giving all of this money to Amazon. But rather, rerouting that money.

Are you fond of reading self publishing blogs? If not, then now is the time for you to check out these best self publishing blogs.Best Self Publishing Blogs for AuthorsOne of my absolute favorite ways of learning more about self-publishing and making sure that I’m on track is to follow the best blogs on the END_OF_DOCUMENT_TOKEN_TO_BE_REPLACED

Do you think your email marketing is ineffective? Haven’t tried ActiveCampaign yet? It might be the right one for your book email marketing. Holding Your Readers’ FocusYou may be thinking that just because you’re an author, you don’t have to pay any attention to marketing and especially not email marketing. Will you be making a huge END_OF_DOCUMENT_TOKEN_TO_BE_REPLACED

Are your books not selling that much? You could increase sales by changing your mindset in self-publishing.Making A Lot Of MistakesWhen I was first getting started with self-publishing, I figured that my number one problem was that the quality was not high enough. Things needed to be perfect before I’d be ready to put my END_OF_DOCUMENT_TOKEN_TO_BE_REPLACED

Are you looking for a tool that can format your book perfectly? I have found the best tool for formatting your book with Jutoh. Having Errors When Formatting Are you paying people to do the formatting of your book? If you’re making a huge mistake that is costing time and money, stick with me while END_OF_DOCUMENT_TOKEN_TO_BE_REPLACED