Should I Publish My Kindle eBooks On ACX And CreateSpace?

As a first-time author, you wanted to get a lot of sales from your self-publish books but sad to say, you don’t have any reviews. Check this out, I will tell you something regarding this setting up an advanced review team – step-by-step to help you succeed in your self-publishing journey.How I StartedToday’s video has END_OF_DOCUMENT_TOKEN_TO_BE_REPLACED

Why Do You Hate Your Readers?

Our readers play a significant role in every book we publish because they’re one of the reasons why we write it but why do you hate your readers? Let me tell you the one reason that you shouldn’t hate and be annoyed by your readers.Your Reader’s PreferenceToday’s video has three points and you’re going to END_OF_DOCUMENT_TOKEN_TO_BE_REPLACED

Quitting KDP Self Publishing in 2021 – WATCH THIS NOW

Are you losing the motivation of seeing thousands of sales for your book with KDP self-publishing? Is it in fact time to quit? If you’re thinking of quitting KDP Self Publishing in 2021 then you should definitely want to check out this blog first!Losing My MotivationToday’s video has three points and you’re going to want END_OF_DOCUMENT_TOKEN_TO_BE_REPLACED

Why Don’t They Teach This About Self-Publishing?

Are you one of the authors who doubt that there’s really a secret to success in your self-publishing journey? Check this out, let me help you find answers to your question, “Why don’t they teach this about self-publishing?”There’s A SecretToday’s video has three points and you’re going to want to stick around. Because the third END_OF_DOCUMENT_TOKEN_TO_BE_REPLACED

Many authors out there are trying to catch readers and find better strategies to market their self-publish books. Check this out, I want to share with you these 3 ways to find more readers for you to succeed in your self-publishing journey.Here’s My StoryToday’s topic has three points and you’re going to want to stick END_OF_DOCUMENT_TOKEN_TO_BE_REPLACED

If You’re Able to Write, You Can Self-Publish a Best Seller

Maybe you’ve set your goal to become a best seller but you’re not even a great writer. Believe in yourself that if you’re able to write, you can self-publish a best seller book. Check this out to know more about the secrets that will help you on your self-publishing journey.The Starting PointToday’s video has three END_OF_DOCUMENT_TOKEN_TO_BE_REPLACED 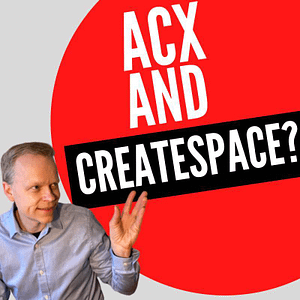 You might be looking for other options now to publish your Kindle ebooks but you are not sure if you should go on ACX and CreateSpace. Let me tell you more about these platforms.

Kindle Is Not Enough

Today's question is, should I publish my Kindle ebooks on ACX and CreateSpace? Thanks for asking. The first thing I would like to say is that this is actually a very difficult question.

The reason it is so difficult is that there are so many places you can publish. I would also like to say congratulations for at least getting your Kindle ebooks.

Your question of whether your Kindle book should be put out on these other locations shows that you already have taken the work to get a Kindle book. Many people have not managed to even get the first step started.

In my story, I also started with Kindle. But then I realized I was listening, reading, taking courses, and all sorts of stuff, that you do not want to stop there. You also want to make sure that you have the Paperback versions.

For me, I saw that the sales on the Paperback versions were about twice as much as they were for Kindle. And the amount of effort necessary was a bit more. I had to go through different formatting tools until I figured out ways to do this myself.

I originally ordered I had other people do it. Then eventually ended up figuring on how to do the formatting myself. At that time, it was CreateSpace but it has since been turned into KDP Amazon Paperback.

Check out this related article: Can I Self-Publish As An eBook And Then Later Approach A Publisher For Paperback?

The Paperback then has been taken under but the format, the rules, the style, and everything pretty much stays the same. There is no major change there. So, that was the first one.

The second lesson that I myself learned was with your audio recordings of this that you would use for ACX. That is a lot more tricky because you have to find somebody who can do the recording. Initially, I did the 50/50 split and I discovered I make no money doing that.

I moved over to paying so I could get the entire revenue myself. I found someone on Upwork, a narrator who would be able to do the narration and I could just pay them.

They would narrate for me at a reasonable price. They would get paid and then I would earn off of those books, the downloads that would happen.

You Should Consider IngramSpark And Lulu

In the early days with ACX, you would make a lot more money if you will publish your kindle ebooks here, like an awful lot more money. It is because you would get bonus bounties for people being the first to buy one of your books.

They removed that service and also they have changed a number of other policies that have made it a little difficult. But it's still definitely worth the effort. To ensure that all of your books, no matter how long they are or how short they are, that they are all in audio format.

If you don't have a Paperback book, then you are going to do with your Amazon Paperback first. So that was a little bit and one other thing that I want to point out here is that ACX was a big money maker and KDP Print was definitely something.

But then what about other options? IngramSpark or Lulu or Drafts2Digital or the others? I found that I don't want to get to Drafts2digital or in other places that can take out where you have to go. Where you are going wide with your Kindle book or your ebook.

Because if you are going over to the other ones, I tried Smashwords and some of these other available options, I found that you can't run ads. It would violate Amazon's contract.

I would not recommend doing anything that would violate the contract. I have seen too many accounts get closed.

IngramSpark, on the other hand, is a fantastic opportunity because it gives a wider distribution. If anything happens to your Amazon account, IngramSpark continues to sell your books in fact on Amazon. So this is another benefit.

Check out this related article: Is IngramSpark Considered A Vanity Publisher Or Vanity Platform In The Self-Publishing Industry?

The other final one is Lulu. It is fantastic for doing hardback books which also will automatically sell on Amazon when they are complete.

You are going to want to make sure that your best-selling books are in hardback as well. So that people who want that hardcover book will be able to get it.

Indeed You Have A Lot Of Options

You might wonder why not somebody just buys the Kindle books if they could just as well do that? The answer is everyone has a preference for the way that they would like to see their book.

So, the point I wanted to draw out of this is that we want our book in as many different formats as possible. CreateSpace doesn't exist but the KDP Print does. We will continue to use that and ACX is a great choice.

Then, finally, IngramSpark for additional Paperback sales and Lulu are also options you would want to consider. But if you are just getting started and you have got your Kindle book, congratulations on that.

You are going to want to move on to KDP Print, that will be your next choice. And you are going to start the process of learning how to do the cover which in my opinion may be one of the most difficult aspects of it. Then, the formatting of the book itself.

Check out this related article: Do You Think It's Still Worth Doing Amazon KDP As A Business?

Once you have done that formatting, you can use the very same manuscript that you did at the very same PDF file for both KDP Print IngramSpark and Lulu. So that you will be able to save yourself quite a bit of time.

The covers are different on these three but the main manuscript is identical so that's a little positive piece of news. Well, why don't you tell me a little bit about what you found?

I have a checklist that I use personally that has worked for me with over 170 books that I have put on Amazon and many of these other areas as well. Check it out. Just a free checklist to help you get started and look at some of the different options.

See if you have maybe forgotten some of the steps. And if you have, let me know below in the comments. Maybe there's a platform you found that is even better than the ones that I found.