Why You Should Format Your Book Yourself 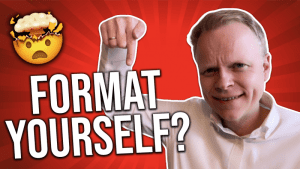 Formatting a book requires the right tool to use. Let me tell you the best tool that I have discovered and why you should format your book yourself.

Do The Next Step

I switched the Kindle mode on my device into dark mode. The text completely disappeared. Today, we're going to talk about why you should format your book yourself.

So here's the thing, I was getting started with my very first book. I  had just been so excited. I was working a thousand words a day to get the book done.

I had taken it through the editing process two times. I hired two separate editors to get this process done. To make sure that I did not make a mistake. With regards to making sure the book was completely ready.

At this point, I was completely ready to get the book formatted. That's the absolute next stop on the self-publishing journey that I was on at that time. The problem is that I  couldn't do it because it was too difficult.

I had heard earlier that if you're trying to self-publish and you're trying to format the book, you can go straight from your Word document. And take it straight into Amazon's formatting. It will be put into an EPUB file on their site.

The problem is as one of my previous business coaches has commented something. If you go this route, there's a huge issue regarding bullet points. And other characters that Word adds to your document.

Check out this related article: How To Price A Self Published Book On Amazon

That you may not be aware of when you're doing this process. So, you do not want to do this Word route. So, I knew better than to give that a try.

What did I do instead? Well, the thing was I realized that I still have to move forward with the next step. I have to get it out because what was at stake was that if I could go for this Word straight into Kindle format, then the book would not be formatted correctly.

The other thing that would be at stake is if I don't do it, if I don't move forward to the next step, I would simply not have a book on the market. It sort of defeats the whole point and wastes all of the time and money that I had used. For editing and writing the book in the first place.

I began to doubt whether or not I could even do this whole process myself. I felt like maybe the whole thing is just too confusing. It might even be worth giving up.

That internal self-doubt began to push me a little bit forward. To say, if I can't do it, then how can I do this? But then a thought hit me that I could hire somebody on Fiverr to go about doing this.

So, why you should format your book yourself? For me, I don't have to do it myself and that was fantastic news.

Because I knew that by hiring somebody on Fiverr who had done this before, they wouldn't make the common mistakes. They would fix the formatting issues that I knew I was going to have if I attempted to go about it alone.

Format Your Book Yourself

So I hired a person, I looked them up on Fiverr based upon their reviews. I sent them my manuscript. Then we began to pray that our formatting would be correct.

Well, what happened was they sent it back to me and said no problem. In fact, it only took them a couple of days. They sent back the formatted version for me.

At that point, I submitted it to Amazon and then they rejected me. It is a bit of an obstacle for me because how exactly am I supposed to get my book there? If they're rejecting my formatted eBook.

This person on Fiverr said they know how to do this thing. But they had made some mistakes. Fortunately, they handle revision so I was able to send it back to them.

I told them, look, I need you to fix this. It was not accepted and here are the reasons why Amazon is rejecting me. The person on Fiverr was very positive about it.

They fixed the book and some of the issues that were in there. They sent the Mobi or EPUB file back to me. I was like, whoa that was pretty fast.

I can't believe you were able to do that quickly. But that was good and again we submit and we start to pray again. That this thing is going to work this time.

The thing was that when I sent it to them, Amazon accepted it. Fantastic, the goal has been achieved. Except for one little problem when I downloaded the Kindle file onto my Kindle device.

I looked at it and I realized, wait for a second here, the table of contents doesn't work well. At least they have a table of contents but it should be so you can click on it. It takes you to the right page but it simply wasn't doing what I needed it for.

So then my next thing was that I decided to test the book out. And see what other issues might be there. I put it into the dark mode where the screen goes black in the background.

Then the text should be white so that we can read what exactly is going on with the book. So I put it in that mode and what happened was all of my text disappeared. The text should have been white but they had hardcoded the text.

This was a huge problem because it meant that the quality of the book was going to be an issue. For anyone who wanted to read it in nighttime or dark mode on their phones or Kindle devices.

So what was I to do then? Well, I can tell you what it was. I was about to lose money with Fiverr. Because I went away from that.

I realized that no, I have to learn how to do this myself. At the same time, I was listening to an awful lot of podcasts and reading books.

I was watching Youtube videos and going through as much material as humanly possible to learn this self-publishing thing. So that is why you have to format your book yourself.

And something became clear, a particular tool which was Scrivener. Somebody had commented that this is the one you're going to want to try to help you format your book yourself. This is the tool for authors that will handle all of your needs.

I was so excited I even went out and bought the full version of Scrivener without even testing it. Now I can tell you later I regretted this. So I installed the thing on my system.

It was very easy to put in there. To get the table of contents showing up on the side. To get the organization of all of my chapters in the formatting.

It could even export it to the Kindle format. But what I discovered was that it simply couldn't do the table of contents when I did the print version. This was a deal-breaker so I wrote back to Scrivener.

I said, look, it doesn't do the table of contents for my print version. They said why did you buy it without testing? I said, well look, I listened to so many people say it was wonderful for them that I thought I would give it a try.

But after Googling it, I found out it doesn't have the “out of the box” function at the time. Things can change, maybe it's fixed now. But that was an issue that I was personally struggling with.

But the fact is that I started working through Jutoh. As I worked through it, I had some questions here and questions there. I talked directly with the developer of the tool and he informed me “you need to do this you need to do that”.

Check out this related article: 3 Things Self Publishers Should Do

The exact same tips that I give people today who are taking my course on formatting books. And as you go through the steps, they're able to use the template. To skip a lot of the mistakes and errors that I made.

That’s why you should format your book yourself. We don't have to talk with the developer to figure out how to get the tool working properly. The best part of it was that when I then put it into Kindle format, it worked perfectly the very first time.

When I took the tool and I put it into the paperback version, it then could put the chapters in the correct order. Exactly and flawlessly so that the paperback version had all of the elements that I wanted to have into it in place. Perfect and ready to go the very first time.

That was one of the starting moments where I realized self-publishing can be easy. In fact, self-publishing is easy if it's done the right way. That was just a very important thing that I had learned with this formatting issue.

It was that yes, I can in fact format myself. But the thing is there are so many things that self-publishers do to sabotage themselves. And if you want to learn more of the 3 ways self-publishers sabotage their success, just check out my previous blog and video.

Are you fond of reading self publishing blogs? If not, then now is the time for you to check out these best self publishing blogs.Best Self Publishing Blogs for AuthorsOne of my absolute favorite ways of learning more about self-publishing and making sure that I’m on track is to follow the best blogs on the END_OF_DOCUMENT_TOKEN_TO_BE_REPLACED

Do you think your email marketing is ineffective? Haven’t tried ActiveCampaign yet? It might be the right one for your book email marketing. Holding Your Readers’ FocusYou may be thinking that just because you’re an author, you don’t have to pay any attention to marketing and especially not email marketing. Will you be making a huge END_OF_DOCUMENT_TOKEN_TO_BE_REPLACED

Are your books not selling that much? You could increase sales by changing your mindset in self-publishing.Making A Lot Of MistakesWhen I was first getting started with self-publishing, I figured that my number one problem was that the quality was not high enough. Things needed to be perfect before I’d be ready to put my END_OF_DOCUMENT_TOKEN_TO_BE_REPLACED

Are you looking for a tool that can format your book perfectly? I have found the best tool for formatting your book with Jutoh. Having Errors When Formatting Are you paying people to do the formatting of your book? If you’re making a huge mistake that is costing time and money, stick with me while END_OF_DOCUMENT_TOKEN_TO_BE_REPLACED