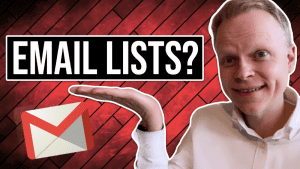 Maybe you’re planning to create an email list but are not sure how to do it. Let me tell you how creating an email list for self-publishers can be so easy.

Ted was ready to quit self-publishing completely. He had no email list and couldn't figure it out. He had no sales on the book that he had out on the market.

And he had no reviews on his book. That's why today, we're discussing Creating an Email List For Self-publishers. So, it was about 6 months ago.

Ted came to me as a coaching client. He wanted to know more about how exactly he could unleash the power of using email. In terms of his marketing to get reviews and to get more sales on his book.

But he didn't know anything about how to set up and get started with an email. The thing was his books had been on the market for a while. They were not getting any sales.

He was ready for the next step. He wanted to know what exactly he could do. Because he had heard there was something about the power of email marketing.

He had reached a point where he was completely ready to give up on everything. The problem was he wasn't very good with technology. So he wasn't sure how exactly he could use this tech if he is not very good at using tech.

So we started doubting a bit upon his abilities. Some people that he listened to suggested maybe he should go to one of the really popular models. It was very expensive and extremely complex.

It involved funnels that you supposedly could click and make millions or something. Your books would start selling like crazy. The problem was his budget wasn't big enough to cover that.

He wasn't sure about how exactly to implement these exact funnel models to generate leads. And email subscribers to do it. As a result, a lot of this stuff from these fake gurus was trying to overcomplicate things.

In order to charge him so much. He realized this was simply not going to work. So the next thing he did was he heard about other cheaper options. But you just set it up on your website.

You're able to then pull the emails in through an auto mailer. One of the cheaper ones for example Mailchimp or Mail Light. He would set up his website to get this going.

But then it required an additional burden which is how do I set up my website? If I'm going to have a website to get these emails on there. Now, I need to understand WordPress and a lot of these other complicated options.

And as you remember, the problem was that technology was a bit of a challenge for Ted. That's when he came to me. We sat down and explored exactly where he was on his self-publishing journey.

After going through a coaching session, we were able to take a look at his exact situation. The best option was Active Campaign. I originally tried Mailchimp which wouldn't allow me to send some links like Amazon links.

I moved over to Aweber which was a bit pricier model. It was not as easy to quickly get started with. So I finally moved to Active Campaign.

Because I found it does have all of the powerful features. It wasn't so complicated that you couldn't get started right away. Another thing was that you don't need an additional website to do this.

In other words, you could just use their built-in template. You could send the traffic right to their model to generate these emails. We discussed a little bit about what he could offer for free.

To get people on his email list. We just concluded that some of the character backgrounds in his fiction book would be a perfect way to do it. Like these character bios.

So, in other words, we would be able to pull readers in. Those who would be interested in reading a little bit more details about his books. To pull them and hook them into giving their email address over to him when somebody purchased his book.

He was getting a few sales here and there but nothing particularly spectacular. His sales had gone to almost nothing. Putting an email requester in the middle, in the beginning, and towards the end.

Asking people, give me your email address and I'll give you more information on these characters. Or perhaps a map of the world that he had done. Or perhaps some other additional short story.

There are a lot of ways of getting people to join the email list. He found for him, it was the character bios. It was the thing that he wanted to nail upon.

So at the beginning of his book, he would just include a link there. Then say, hey get a free (whatever it happens to be). And then what would happen is that people who came to his page and did the look-through, in other words deciding whether they wanted to get his book or not would even see the link.

They would think, “oh my goodness! Look, I don't even have to buy the book and I can just get a free thing without even buying the book.” Little do they know, they're giving their email address so that he's able to ask and make requests.

Because I don't want to bother people. I commented to them that you need to do it weekly. Because if you go on a monthly or every other month, people forget you.

They will mark you as spam. That will create problems with your email responder. Twice a week is even better, which is something that I tend to use on my email list.

Two times a week making general notifications for special events. For example when something's going to go on sale. Or I have a special deal and then we'll send out special ones for special high points.

For example on St Patrick's Day or Mother's Day. So that we'd be able to generate additional traffic. Giving people the best offer and best value as much as possible.

Also celebrating particular high points of the year like Christmas, Black Friday, etc. So he finally did get through the steps. He was able to set up his Active Campaign account.

He was able to put the links into his book. So that when the readers were coming through, he started seeing people join the email list. But then he said, how can he use this to get emails and reviews for his books?

I told him what’s the easiest way of going and getting these reviews. It is simply asking the people who have joined your list, “hey would you like to get an advanced copy of my book in exchange for a review?” No matter if your list is five people or five thousand people.

So, creating an email list for self-publishers? The fact is that this particular strategy is a very effective one. Because people are like yes, I want the next book in your series for free in exchange for this. It is a fantastic deal.

So the thing is that he finally reached the point where he had people. They were getting ready to leave a review on his book. But then they discovered they needed to actually have spent $50 on Amazon.

In order to even leave the reviews. And that was when I suggested to him one thing he might consider doing. To let them join your advanced review team, you want to first see that they've already left a review on Amazon.

If they've never left a review on Amazon, it might be wise not to just give your books away. Don’t give your books for free to people on your email list. But rather, make sure that they have already done it.

Write down the name exactly in the book they've left the review on. Then, when you give them your free book say, “Look, I can give it to you but I can give you about a month. To get to read it and leave a review on my book.”

If they don't do that, well then you put them on a blacklist. We don't give them any additional books for free. So this was very very powerful, he was able to implement this.

By using the strategies that I went through with him during our session. He saw that he kept on growing the size of the list. He was building relationships with his readers.

He was discussing aspects of his book. He was seeing that his readers became more enthusiastic. He was able to increase sales by telling them when new books would be coming out.

As well as finally getting these reviews on his books. Which is triggering organic sales, bringing additional people onto his email list. And it went round and round.

So you see, by implementing these email strategies, Ted was completely able to do that. The next step for Ted, though I told him was you're definitely going to want to focus on your Amazon ads. That's the reason why I said, you need to check out my last blog, 3 Best Amazon Ads Strategies For Beginners.

Are you fond of reading self publishing blogs? If not, then now is the time for you to check out these best self publishing blogs.Best Self Publishing Blogs for AuthorsOne of my absolute favorite ways of learning more about self-publishing and making sure that I’m on track is to follow the best blogs on the END_OF_DOCUMENT_TOKEN_TO_BE_REPLACED

Do you think your email marketing is ineffective? Haven’t tried ActiveCampaign yet? It might be the right one for your book email marketing. Holding Your Readers’ FocusYou may be thinking that just because you’re an author, you don’t have to pay any attention to marketing and especially not email marketing. Will you be making a huge END_OF_DOCUMENT_TOKEN_TO_BE_REPLACED

Are your books not selling that much? You could increase sales by changing your mindset in self-publishing.Making A Lot Of MistakesWhen I was first getting started with self-publishing, I figured that my number one problem was that the quality was not high enough. Things needed to be perfect before I’d be ready to put my END_OF_DOCUMENT_TOKEN_TO_BE_REPLACED

Are you looking for a tool that can format your book perfectly? I have found the best tool for formatting your book with Jutoh. Having Errors When Formatting Are you paying people to do the formatting of your book? If you’re making a huge mistake that is costing time and money, stick with me while END_OF_DOCUMENT_TOKEN_TO_BE_REPLACED