Using A Pen Name In The Early Stages Of Your Career?

Couldn’t figure out what has gone wrong with your book and why it’s not selling? Here are the self-publishing mistakes to avoid for your books to be of high quality just like the top bestsellers on the market.Editing Back And ForthGary was getting ready to start writing his seventh book. The problem is that Gary END_OF_DOCUMENT_TOKEN_TO_BE_REPLACED

Keywords could play an important role in making your books visible on search engines. Learn how to use keywords on Amazon KDP now.Finding And Buying The BookBeth was really proud of the clever title that she had come up with a “Gardening” book except for one problem. This clever title was not being searched and END_OF_DOCUMENT_TOKEN_TO_BE_REPLACED

Are you fully determined to do self-publishing but don’t know how to write, publish, and sell an eBook? Let me tell you the key steps that will help you succeed in self-publishing.Developing A Self-DoubtTim deleted his entire manuscript off of his computer and was ready to call this writing thing quits. That’s one of the END_OF_DOCUMENT_TOKEN_TO_BE_REPLACED

Ever wonder how to get a book published correctly? Let me tell you how exactly you can do that based on my own experience.Knowing The Phases Of Self-PublishingKaren got back the draft version of her children’s book from the hybrid publisher and it was a complete mess. She was ready to give up but that END_OF_DOCUMENT_TOKEN_TO_BE_REPLACED

Are you struggling to sell your non fiction self-published books? Here are the 3 reasons non fiction books don’t sell that you need to know.Choosing A Catchy TermSarah told me nobody wanted to buy her recipes. For some reason, they were just not high enough quality. Well, she was very much mistaken and that’s the END_OF_DOCUMENT_TOKEN_TO_BE_REPLACED

Have you published your book and wanted to make some adjustments? You might be asking, is it too late to change my book? I will tell you the answer with some tips to help make self-publishing easier for you.Frustrated With A Terrible StrategyLarry told me, “I guess we should just count my first book as END_OF_DOCUMENT_TOKEN_TO_BE_REPLACED 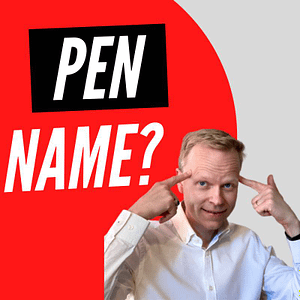 Exposing your name to books that you've produced is a good idea but being an anonymous author might be a much better idea. Find out how using a pen name can help you with controversial topics of your books.

Today's question has three answers. The third one will show you how using pen names can make you a lot more money. Now, let me just get right on into the question.

So the question was, using a pen name in the early stages of your career, is this a good idea? Or is this a bad idea? Well, this is a very interesting one.

I had never considered using a pen name because I figured when I first started, should I use my name? Or why would I write a book, unless I was going to use my name?

Since I had put in the work and such. I figured it would just be for people who were using pen names.

So there's an awful lot of questions surrounding the issue of using pen names. But before I start, check out my Self-Publishing Secrets Checklist to help you get started on your self-publishing journey.

Now let's get right on into it. When I started self-publishing, I did not use a pen name. I started by using my own name.

I picked topics and books that I was familiar with or interested in. That I could research and write books on. So, I came out with several books.

Throughout the journey, I then began to discover that there is a good reason to use pen names. Since then, of my 170 plus books, many of them are using maybe 15 different pen names between the different ones.

Check out this related article: Am I Allowed To Use An Alias When Using Amazon's KDP Service?

And I can get a little bit more into that on the answers to exactly why that is a good idea. Now the first thing is, there is no problem using one or more pen names.

The reason people like to use pen names, it can be because you're writing on an embarrassing topic. Whether it's like romance or something like that.

Or you don't want your name associated necessarily with the writing you're doing. Or maybe it's like how-to non-fiction books on subjects that can be very sensitive.

From marijuana or other controversial topics. And you do not wish to have your name associated with those topics. So it can be the first one.

The second thing is, it's a side job. You're doing it on the side. And you don't want to draw attention to the books that you're writing.

Even if they're just fiction books. That's another one. Another reason, some people would do it because they're embarrassed by the quality of the writing that they're doing.

They know they're not particularly all that high-quality. And they don't necessarily want to have their name associated with those books. So that also gives you another reason that you might wish to use a pen name when writing your books.

Check out this related article: Does Self-Publishing Hurt Your Chances To Become Popular?

The other thing to remember is that many famous authors have used pen names. And there's a whole series of different reasons. That you might go about using a pen name as opposed to using your real name when doing it.

The third answer is the secret answer to how you can earn more money. It is the fact that you're writing in multiple genres. Let's say for example you're writing in horror on the one side and you also want to do cookbooks.

If you put those under the same author, you will decrease the money you make for both of them. That is because people will assume you're neither particularly good at one.

Or the other that you're just rather jumping all over the place. You're not specialized in anything. It undermines your authority as an author regardless of the quality of the books.

Standard Practice Of An Author

People will assume, "well, wait for a second, what kind of author is this?" There's a narrative in their minds. And the narrative that they have is they want to make sure that the books that you're writing are all within the same genre.

So if you're planning on breaking off which is okay, branching off into multiple genres. You're going to want to make sure that break off, they do use different pen names.

Check out this related article: Which Is More Profitable In General For Kindle And KDP Authors, Fiction Or Nonfiction?

Later on, you can take credit for those different pen names if you would like. But at least in the beginning, it is a good idea to not do that.

If you wish to maximize the number of books you're going to be selling. Use different pen names. There's nothing dangerous.

It's not unethical. There's no problem with that, you're not tricking anybody. This is standard practice, so that's another one.

And also if you didn't write the books yourself it's probably not a good idea. We regularly read in the news of people who supposedly wrote a book like celebrities. And in reality, somebody else had written the book completely for them.

Even though that also is still can be okay. Having a ghostwriter who writes a book that puts together the ideas and the words that you say. This is still not a great practice.

I personally do not like to put my name to something that I did not produce or write. So that's just another little tidbit to keep in mind when you're deciding should you use a pen name or real name?

Or have you found advantages to using your own name or real name? So that, when you go around like people, would recognize, "wait I recognize your name as an author of those books".

Go ahead and let me know below in the comments. And check out my other blogs and videos where I answer questions just like this one.