Worried Companies Will Sue You For Your Book?

You may be wondering if this year is a good time to do self-publishing. Should you self-publish your book in 2022? Or should you just wait for another year? Find out the answer today.Thinking About OversaturationTerry told me the market is completely flooded with books at the moment. So there’s no point in publishing one END_OF_DOCUMENT_TOKEN_TO_BE_REPLACED

Couldn’t figure out what has gone wrong with your book and why it’s not selling? Here are the self-publishing mistakes to avoid for your books to be of high quality just like the top bestsellers on the market.Editing Back And ForthGary was getting ready to start writing his seventh book. The problem is that Gary END_OF_DOCUMENT_TOKEN_TO_BE_REPLACED

Keywords could play an important role in making your books visible on search engines. Learn how to use keywords on Amazon KDP now.Finding And Buying The BookBeth was really proud of the clever title that she had come up with a “Gardening” book except for one problem. This clever title was not being searched and END_OF_DOCUMENT_TOKEN_TO_BE_REPLACED

Are you fully determined to do self-publishing but don’t know how to write, publish, and sell an eBook? Let me tell you the key steps that will help you succeed in self-publishing.Developing A Self-DoubtTim deleted his entire manuscript off of his computer and was ready to call this writing thing quits. That’s one of the END_OF_DOCUMENT_TOKEN_TO_BE_REPLACED

Ever wonder how to get a book published correctly? Let me tell you how exactly you can do that based on my own experience.Knowing The Phases Of Self-PublishingKaren got back the draft version of her children’s book from the hybrid publisher and it was a complete mess. She was ready to give up but that END_OF_DOCUMENT_TOKEN_TO_BE_REPLACED

Are you struggling to sell your non fiction self-published books? Here are the 3 reasons non fiction books don’t sell that you need to know.Choosing A Catchy TermSarah told me nobody wanted to buy her recipes. For some reason, they were just not high enough quality. Well, she was very much mistaken and that’s the END_OF_DOCUMENT_TOKEN_TO_BE_REPLACED 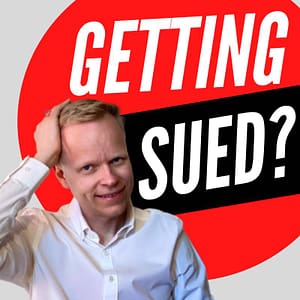 Having this question in your mind "Worried companies will sue you for your book?" let me help you with that. Learn about the right steps that you should follow to shake the worries away.

Today's question or problem has three answers and the third answer is something you're going to want to stick around for. Because I'm going to tell you exactly what you need to do to not get sued for the book that you're putting onto the market.

So let me get into it. Today's question or problem was, worried companies will sue you for your book? That is something that many people do wonder about because perhaps you're writing a book about something.

Maybe a person or you're writing a book about a product of some sort. Maybe a video game, your strategies for a fortnight is another example. There are all sorts of examples where you're using other people's things.

It could also be fan fiction. So maybe you're thinking of writing some Star Wars fan fiction and putting it on the market. But you're wondering, maybe I'm going to get sued if I do that and so I need to think twice about whether or not I should do it.

That is what we are going to answer in today's article. But before we get into the answers, grab a copy of my absolutely free Self-Publishing Checklist. To make sure that you are not skipping any of the important steps when getting your book onto the market.

Also to make sure you're making sales off of it. So go ahead and check that out. So let's get into it. Minecraft? That is the story we're going to look at today.

The thing is I knew a person who was making an awful lot of money off of a series of books they had done. They had done some Pokemon but it was the Minecraft ones where you would take Minecraft and you would put together a book that would have the animations.

The different illustrations and drawings from the Minecraft series and then it would just have stories. You would use your creativity as an artist and you would create very amazing stories. But you were doing all of this without the permission of the owners of the trademark.

Check out this related article: How To Self Publish Sheet Music?

The registered trademark and just the title itself "Minecraft". So what happens is that there was at least a huge market for these exact books. Kids love the stories, lots of positive feedback, and tons of sales at Christmas time.

And so that person was making quite a bit of money off of it. It was through Minecraft or maybe Pokemon was another one and the other would be like fan fiction. I haven't seen so much on that front where people were selling books on Amazon for that.

But then what happened was they ended up having a problem because I think Microsoft who owned it at the time, did a takedown request to Amazon telling them that this book is owned by somebody else. That is you can't just use their title if you want to.

This can be an interesting question because even if you do like let's say helping people how to use Microsoft Excel. Is that allowed where you're using Excel in the title or do you have to say an unofficial guide? And does that protect you?

So there are many questions that we have that can be around this. What happened was they did not sue him but with the takedown request, they made sure that none of his books were being sold on Amazon.

This friend of mine ended up pivoting to writing about elves and other characters. So it would be very similar stories to the Minecraft stories. But this time, it would be something that isn't protected.

Check out this related article: Is Self-Publishing Too Complicated?

And so what they found was of course they weren't making as much money. Because people who are interested in Minecraft or Pokemon want to read about this exact subject. But when you end up going in this route, you're not going to make as much money.

But nobody can do a takedown request because you're writing the same stories, just with elves for example which is maybe a good lesson to learn too. So the thing is they did make less money but then they won't risk these takedown requests so that you can see the amount of money.

Because obviously, if you're seeing I think it was $40,000 in one December coming through and then the person suddenly went to nothing from those books because obviously, they couldn't make anything. Because they were selling it but they did not get sued.

And all of the people that I'm familiar with, I haven't heard of anybody ever actually getting sued. That doesn't mean they couldn't but I just haven't heard of it. So, are you worried companies will sue you for your book?

There are a couple of things, the first is you can get in trouble for using other people's trademarks in your book. So you need to be very very careful about doing that. Because one is even if you make some money but then suddenly they do a takedown, then you end up losing in the long run.

Secondly, they could theoretically sue you. The second thing is you can also have issues if you sell books as fan fiction. So if you're taking your Harry Potter World or Star Wars and you suddenly are writing books inside of that universe.

Then putting it out onto the market using various the same symbols in the same pictures which could confuse the audience that this book here is not an authorized book by the owners of that copyright-like Disney.

For example, writing Disney stories but you're not paid and you're making money off of it. You're risking that takedown occurring or maybe getting sued. But the secret of today is that usually, you will just get a takedown request.

But why exactly would you want to take this risk? It's just too high of a risk. They spent a lot of money to build that brand and they don't want anybody and their brother coming out with a book.

That is hitting on those same things that they own the rights. And maybe it can hurt their brand depending upon it's presented and such and somebody else making money where you didn't pay them for licensing to use that brand.

You know, if you were doing t-shirts or making little dolls or whatever it might be. In this case, it would be the book side of things that we need to be very very careful. Or else we risk putting ourselves in the line of fire by these companies.

Check out this related article: Are The Tools Too Difficult To Learn?

So this would be something you would want to be very careful about. If you do choose to go there anyway, you at least need to say unofficial. So it's very clear that you're somebody who's not associated with the company itself.

That you're not trying to claim that you are part of Pokemon or Minecraft, you're working from Microsoft or something. So I would not do that but it's a little bit gray. I was surprised they don't sue at least I haven't ever heard of that scenario but it could happen.

I don't think it's probably worth the risk of building on other people's products. If you can help it even though each has its internal level of risk that they would be willing to take. So, are you worried companies will sue you for your book? Have you written a book where you use somebody else's trademark material?