How Much Does Self Publishing School Cost?

You may be wondering if this year is a good time to do self-publishing. Should you self-publish your book in 2022? Or should you just wait for another year? Find out the answer today.Thinking About OversaturationTerry told me the market is completely flooded with books at the moment. So there’s no point in publishing one END_OF_DOCUMENT_TOKEN_TO_BE_REPLACED

Couldn’t figure out what has gone wrong with your book and why it’s not selling? Here are the self-publishing mistakes to avoid for your books to be of high quality just like the top bestsellers on the market.Editing Back And ForthGary was getting ready to start writing his seventh book. The problem is that Gary END_OF_DOCUMENT_TOKEN_TO_BE_REPLACED

Keywords could play an important role in making your books visible on search engines. Learn how to use keywords on Amazon KDP now.Finding And Buying The BookBeth was really proud of the clever title that she had come up with a “Gardening” book except for one problem. This clever title was not being searched and END_OF_DOCUMENT_TOKEN_TO_BE_REPLACED

Are you fully determined to do self-publishing but don’t know how to write, publish, and sell an eBook? Let me tell you the key steps that will help you succeed in self-publishing.Developing A Self-DoubtTim deleted his entire manuscript off of his computer and was ready to call this writing thing quits. That’s one of the END_OF_DOCUMENT_TOKEN_TO_BE_REPLACED

Ever wonder how to get a book published correctly? Let me tell you how exactly you can do that based on my own experience.Knowing The Phases Of Self-PublishingKaren got back the draft version of her children’s book from the hybrid publisher and it was a complete mess. She was ready to give up but that END_OF_DOCUMENT_TOKEN_TO_BE_REPLACED

Are you struggling to sell your non fiction self-published books? Here are the 3 reasons non fiction books don’t sell that you need to know.Choosing A Catchy TermSarah told me nobody wanted to buy her recipes. For some reason, they were just not high enough quality. Well, she was very much mistaken and that’s the END_OF_DOCUMENT_TOKEN_TO_BE_REPLACED 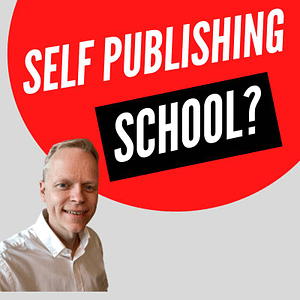 If you're starting and wanting to get going with self-publishing then you're on the right track. Find out how much does a self publishing school cost and see if it's worth it.

My Self Publishing Journey

Today's question has three answers. The third answer is a secret that may save you a lot of money when trying to choose the right course for you when learning self-publishing. So let's get into it.

Because when you're starting and wanting to get going on self-publishing you hear a lot of different options. And it's not clear which one should be the right choice for you. Price is one way that we often use.

It's the top reason that we decide what the value of a course. However, if we go to websites often they will hide the price of these courses, we won't see them immediately.

So it takes us some time to research it to figure out what exactly the cost is going to be. So it's good to be able to know what it's going to be if we're going to go that particular route.

Check out my free Self-Publishing Secrets Checklist to help you get started with your self-publishing journey. Because here, we believe that self-publishing doesn't have to be so difficult. So let's get into it.

When I started, I did not pay for a very expensive course in self-publishing. Rather, I started with I think it was a free ebook and then I liked it so much that I bought another ebook. They told me how to get into the self-publishing thing.

Check out this related article: What Does Self Publishing Mean?

I followed the instructions and I got my first ebook onto the market. It was amazing how easy and simple the whole process was since then I realized I wasn't able to get sales on that book very well. So I took different courses that cost different amounts of money.

Some of them were as cheap as $30 and some cost hundreds of dollars. But I took several different courses and discovered that each one of them contributes a little bit to the puzzle.

But one thing that was in common with all of these courses was that they were using the same material over and over. So that no matter which course you bought you were still getting a little bit of the same content.

And in the forums, you would find different strategies being thrown out. That may or may not have made it into the courses because a lot of these courses don't update the material. They just used the same stuff over and over.

And so that was what I had found at that time. So that brings us back to the main question which is, how much does self publishing school cost? And the answer is the cost of the school is $3,997.

So that would be four thousand dollars at least at the time of the making of this video. That's how much the school will cost you. Now you can get something like Kindle money mastery at a hundred dollars.

I do coaching at a hundred dollars a week. There are many options that you can choose when you're first learning. You could use my free checklist and it will show you how to get going for free that costs absolutely nothing.

And that's the reason I like to break it down and keep self-publishing easy. That's what we're all about here on this channel. That is the second one which is there are lots of ways that you can do it with Youtube just free.

That's an option though that can be a little trickier since you'll see lots of confusing advice that goes in different directions. But the secret today that I've hinted on a little bit earlier is answer number three today.

So the secret answer to the day it is that the expensive and cheap courses teach nearly the same material. So if you want to pay four thousand dollars it may motivate you more to do it.

But a lot of the material will be the same as the cheaper courses which are telling you the same thing. They're telling you the places where you can get the different parts of the whole process done for you or you can do it yourself.

Check out this related article: Where Can I Find Amazon Self Publishing Login?

You're going to eventually really ought to learn how to do the different steps yourself. Now it's true that sometimes there are these package deals where they'll have the whole thing ready for you.

With a cover designing and all of this sort of stuff. And below in the description, you'll see the tools that I use when I'm producing my book.

One of my goals was to keep it simple and to keep the price as low as possible. It is because I want to put out a lot of books and not a few books.

That's the reason I put out over 170 books and I don't want to have to pay 4000 a book or something like that to do this process. If you feel that it will be motivational for you to spend so much money, you can do that.

But I would opt to go for a cheaper less expensive course that will have the same material but also is highly rate ranked. And that people have also had similar results.

Often when a course is making a lot of money, they have a lot more money to invest in high-quality videos to show the testimonies. As opposed to some of the cheaper courses which will contain the same material but not giving anything less in terms of value.

I am not attacking here on this channel. I don't attack anybody's material or the content and tell you anything about that.

I would just say that I have taken some courses. And I can see that you don't necessarily have to spend $4,000 if you don't want to.

If you're persuaded by the ad copy and these sorts of things then I think you should go along with it if you had friends and staff who are excited about it. Sometimes in the forms and things like that you can find yourself in these groups where you pay that much money.

Check out this related article: What Are The Self Publishing Pros And Cons?

And maybe that helps motivate you to feel like well I've got to follow through with this since I've spent so much money on it. But I'm just telling you, you don't necessarily have to go with the most expensive route when it comes to self-publishing.

You can go on a lot cheaper route. And that also should work just fine for you. But that's up to you. So what about you?

How much does self publishing school cost? Is it too much? Did I get the price wrong? Has it changed? Maybe it's gone up or down since the last update that I've seen.

Go ahead and let me know below in the comments and check out my other blogs and videos that will answer your self-publishing questions.