Are There Self Publishing Success Stories?

Couldn’t figure out what has gone wrong with your book and why it’s not selling? Here are the self-publishing mistakes to avoid for your books to be of high quality just like the top bestsellers on the market.Editing Back And ForthGary was getting ready to start writing his seventh book. The problem is that Gary END_OF_DOCUMENT_TOKEN_TO_BE_REPLACED

Keywords could play an important role in making your books visible on search engines. Learn how to use keywords on Amazon KDP now.Finding And Buying The BookBeth was really proud of the clever title that she had come up with a “Gardening” book except for one problem. This clever title was not being searched and END_OF_DOCUMENT_TOKEN_TO_BE_REPLACED

Are you fully determined to do self-publishing but don’t know how to write, publish, and sell an eBook? Let me tell you the key steps that will help you succeed in self-publishing.Developing A Self-DoubtTim deleted his entire manuscript off of his computer and was ready to call this writing thing quits. That’s one of the END_OF_DOCUMENT_TOKEN_TO_BE_REPLACED

Ever wonder how to get a book published correctly? Let me tell you how exactly you can do that based on my own experience.Knowing The Phases Of Self-PublishingKaren got back the draft version of her children’s book from the hybrid publisher and it was a complete mess. She was ready to give up but that END_OF_DOCUMENT_TOKEN_TO_BE_REPLACED

Are you struggling to sell your non fiction self-published books? Here are the 3 reasons non fiction books don’t sell that you need to know.Choosing A Catchy TermSarah told me nobody wanted to buy her recipes. For some reason, they were just not high enough quality. Well, she was very much mistaken and that’s the END_OF_DOCUMENT_TOKEN_TO_BE_REPLACED

Have you published your book and wanted to make some adjustments? You might be asking, is it too late to change my book? I will tell you the answer with some tips to help make self-publishing easier for you.Frustrated With A Terrible StrategyLarry told me, “I guess we should just count my first book as END_OF_DOCUMENT_TOKEN_TO_BE_REPLACED 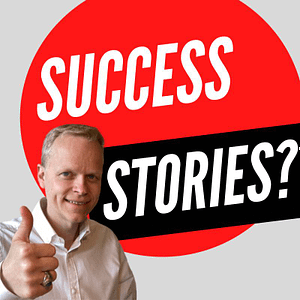 Stimulation Behind Every Success

Today's question has three answers. You are going to want to stick around because the third answer is a secret that may make the difference between winning and losing in self-publishing for you.

So let's get right on into it. Today's question that was sent in is, are there many self publishing success stories? Now, I completely understand why you would want to know this answer.

That is because when we're getting started in anything, we want to know is it possible to actually succeed? And success can mean different things for different people.

Check out this related article: How To Reach More Kids As A New Author?

All sorts of things that could be several issues involved in what exactly winning can mean for you. But why should you jump into it if there aren't a lot of success stories?

Check out my free Self-Publishing Secrets Checklist to getting started with your self-publishing journey. So let's get right on into it.

When I first started, I saw that there were very few success stories. Some of the people that I followed at the time, had made as much as $40,000 a month.

Actually, Steve Scott went up to $60,000 marked out to show how much money can be made with self publishing. I was completely blown away by that. I realized he was even writing books on topics that I was very interested in.

So it was a no-brainer, the idea of saying "maybe I should jump into it". And as you can see the success stories of other self-publishers can inspire you to succeed.

Now, when I first started publishing I discovered the success was a lot more difficult than it initially appears. Because lots of people are putting books out there and many of them are not selling those books.

They're not making the sales that they would like to make and they're getting discouraged. There are several things between the winners and losers. But let's get first into the question regarding this self publishing success stories.

And the answer is, yes, there are a lot of self publishing success stories. If you just google it, you will see a list of people who have succeeded with self-publishing.

Then, later maybe became traditionally published or preferred the profit margin in self publishing and continue to do that. However, I like to call these people lottery winner authors for the most part.

And this would be the very famous people who wrote their first book and they magically became best-sellers. Often, they've been practicing for a long time.

Check out this related article: 7 Tips From Successful Self-Published Authors

Maybe they've even written many books where they weren't selling out many copies. But they just got lucky because they may be even following some of the best strategies.

If you're paying close attention, that can be the difference. We'll get into that on our third secret answer for today. Number two is the average author on Amazon earns $1,000 a year.

It is absolutely terrible. How exactly can you make a living off of that? Think about all the time and energy the person has put on their book to only make a thousand dollars a year.

And that brings us into our third answer to the question, are there many self publishing success stories? And the answer is we want to find ourselves. We want to join groups and other places where the sales are being made.

And where people are discussing the key strategies for making sales. This can be found in a wide variety of places. A Youtube channel is a perfect example.

I discuss the key strategies for succeeding in self publishing so that you also can join the success stories. Also, there are many groups on Facebook, and other locations were people sit around and all they do is discuss strategies.

They tried but they've failed that, and then they have succeeded that. Now if somebody's going to sell you a thousand dollar course that would do it all for you, I would not suggest going for that.

Instead, I would suggest starting in simple. Trying to keep things easy when we're getting our self publishing journey going. Making sure we're in touch with people who are testing stuff.

Check out this related article: Finding An Amazon KDP Mentor?

Asking questions, answering questions, teaching you the things, and the skills you're going to need. You're going to also succeed at self publishing and become one of those people. In fact, I can name a single self-publisher who succeeded apart from groups.

Where people were discussing running Facebook ads. How's the cover and how are your descriptions? Which topics are you doing like keyword topics?

I used a program called Kindle Spy to find the topics that I'm going to publish. And to make sure that those topics are things for which people already buying books. The market exists but there are very few books.

That combination is a key to becoming a self publishing success story yourself. If that is exactly your goal.

Well, tell me what you found. Have you been a self publishing success story? Have you managed to beat that thousand dollars a year as a self-published author?

I'd love to hear a little bit about it down below in the comments. And check out my other blogs and videos that answer your self-publishing questions.